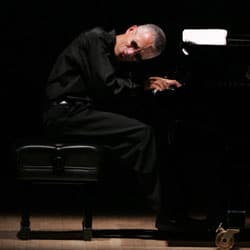 It’s five years since pianist, composer and jazz icon Keith Jarrett last appeared at the Royal Festival Hall with his trio and many more since he treated London to one of his solo improvisation evenings.

No surprise, then, that this rare appearance was greeted with keen anticipation. Tickets sold out at the speed of light and a rapturous reception was pretty much assured.

There was no doubting the adoration the crowd had for Jarrett (one man couldn’t hold back his feelings, repeatedly yelling “I love you”) but it didn’t stop him having to berate the incontinent coughers that are endemic in the concert hall these days. Shortly into his third impro, he broke off to do this in characteristically irascible fashion, moving to the microphone for a lecture on how to behave when out.

If a classical musician dared do this, he’d be met with outraged accusations of ivory towers and snobbism but, of course, Jarrett is absolutely right. Casual coughing is a sign of inattention something this artist will not tolerate and he battered the offenders into near-silence. Explaining that not coughing is easy and actually preferable, he pertly suggested “Try it, you’ll like it” before picking up from where he left off at the keyboard.

For those of us not lucky enough to have attended his legendary concerts Paris, Kln, Bregenz, Lausanne, Bremen, Vienna etc we have only the recordings to go by. Repeated listenings make it almost impossible to conceive these monumental “works” as improvisations, so structured and lofty are they. Having the chance to hear the music pass through Jarrett, as he stamps, groans and twists through outpourings of inspiration is a thrill.

Working through a dozen impros over two hours, there was bags of variety, from atonal jaunts, Debussian ripples, Elliott Carter-like strings, gospel-blues to singing, romantic love-songs. All that was missing was one of the huge arcs that he used to carve (single sets that could take as long as 40 minutes), where you have to work through the pain barrier to reach the sunny uplands.

Opting for miniatures of no longer than 10 minutes or so robbed us of these sustained and demanding journies. A beautifully-nuanced opening number that flew from the word go and a slow, hypnotic, bolero-like dance in the second half (a real highlight) both held out the promise of something more epic but ended all too soon.

Spotting a photographer (a strictly forbidden activity), Jarrett began after the interval with another telling-off, lobbing a rhetorical “What is it about the world that demands an image?” into the audience, before returning to the keyboard for some classic Jarrett sound. Philosophy to boot.

The obligatory standing ovation and deafening roars (behaviour Jarrett appeared not to object to) led to several encores, which included My Song and a floaty version of Somewhere Over The Rainbow. This wasn’t a great Keith Jarrett performance but certainly a very good one and, for those who hadn’t seen him do this stuff live before, something we’d been waiting a long time for.