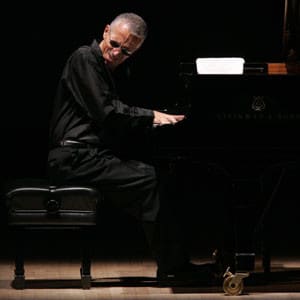 Once a great rarity, Keith Jarrett concerts now seem to be assuming a ritualistic regularity. In the past five years, Jarrett has visited London twice with his Standards Trio (with bassist Gary Peacock and drummer Jack DeJohnette) and now twice as a solo performer, perhaps the context for which he is most revered. The recording of his legendary solo concert in Koln remains one of the biggest selling jazz albums of all time and, nearly three decades on from that, Jarrett has the ability to sell out a large concert hall in minutes, a feat very familiar from the rock and pop worlds, but not nearly so commonplace in jazz.

Also ritualistic by now is Jarrett’s notoriously confrontational approach to his audience. He detests camera phones and berates the front rows for using them (‘it means those little things are more important to you than 64 years of work at an instrument’). By now, it is as if they take the pictures simply to provoke the inevitable response. Given his aversion to coughing, a bitingly cold British February would seem to be just about the worst time to schedule one of his improvised solo concerts, for which he requires intense focus and concentration.

Tonight, however, Jarrett does not seem to be quite himself – or perhaps we see a little more of the real Keith than he would usually have us see. “Does anyone have a particular chord they’d like to request?,” he asks two pieces in to the first set. “I was just feeling baffled – this instrument suddenly seemed much larger than usual.” It’s a moment of disarming and winning vulnerability, as is his sudden request for a three minute break to dose up on a variety of cold remedies (“whiskey, ginger – all sorts of things I wouldn’t normally take before a solo concert”).

Perhaps as a result, this concert does not have quite the same pitch of intensity as the 2008 London concert, which took place in the immediate aftermath of Jarrett’s split from his wife and which felt intimate, at once tempestuous and uplifting. The opening moments of tonight’s first set, whilst having glimmers of breathtaking excitement and great beauty, also feel a little tentative, as if Jarrett is grasping for that transcendent state in which he makes his best music, but does not quite get there.

The opening piece begins frantically, with a dense and agitated flurry of atonal activity, before broadening out into something more open and spirited. The second improvisation contains many of the tropes that make Jarrett so adored by his legion of admirers and also so reviled by his fewer but vocal detractors. It begins with the kind of beautiful, affecting and stirring melody that suggests that, beneath his often icy exterior, Jarrett is an old fashioned romantic. It then breaks out into the kind of brilliant, spiritually-infused gospel vamp that Jarrett deploys so frequently.

Jarrett has some interesting solutions for dealing with the occasional absence of inspiration. He launches into a couple of blues based constructions, the first of which seems to borrow its bass line from Ray Charles’ What’d I Say and has an irresistible, near-childlike energy and excitement. During the second set, he sadly abandons a potentially intriguing township-meets-calypso hybrid in favour of an unexpected deconstruction of Gershwin’s Summertime, perhaps the most overplayed standard in the entire repertoire. Perhaps this is part of this concert’s overarching sly humour – an ironic commentary on what audiences often want to hear, or even a little dig at the British weather. The concluding piece of the first set – a part-tetchy, part-mischievous rollercoaster that echoes the first piece, seems to sum up the mood perfectly. In the second set, the pieces often end with witty statements that make devious play on jazz cliches.

Jarrett seems to turn a corner after the interval (at least until that delightful rendition of Summertime). The first piece of the second set seems more focused and sustained, initially stating and developing a three note motif, before expanding into something both graceful and exultant. There’s also a lovely, heartfelt ballad in C major and a rapid, energetic piece that seems to hint at some of jazz’s rich history (there are possibly suggestions of the themes of Thelonious Monk and Sonny Rollins). What is most impressive about Jarrett’s best improvisations is the extent to which they feel like fully organised and orchestrated compositions.

The inevitable succession of encores, for which the audience is forced to applaud with near-painful vigour as Jarrett walks on and off-stage at a deliberately slow pace, are simply gorgeous, including another bright, inspired and joyful moment of Jarrett gospel, a take on Miss Otis Regrets and a lovely, touching take on Once Upon A Time. These deftly avoid stepping over the line into more saccharine territory through the deployment of the odd unpredictable chord change, and through the sheer depth of emotion Jarrett invests in his playing, even in the face of adversity. His music seems to simultaneously capture a sense of awe and innocence. On the whole though, tonight sees a little bit less of Jarrett the transcendent virtuoso, and a little more of Jarrett the human being. In itself, this is quite a wonderful thing.