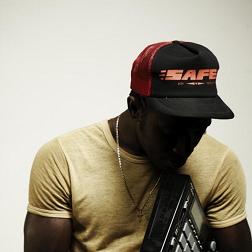 It’s no fun finding yourself utterly lost and unable to feel comfortable, and it appears that is how Kele Okereke felt as Bloc Party wound down into their ‘indefinite hiatus’.

The two albums that followed the superb and, in hindsight highly influential, debut Silent Alarm never really reached the same dizzying heights. When they played the more electronic-driven songs, where Kele dropped the guitar and assumed the role of outright front man, it seemed to be where his heart really was.

Fast forward a year after Bloc Party’s last show, and it’s his name that shines brightly in neon onstage. Gone are the angular guitars, and in comes rave.

The big question of the evening is a relatively simple one. Is he confident enough in his new-found musical voice to try and distinguish himself as a completely different artist to the slightly paranoid and scared one from his former band? And does he feel like he has to pander to those Bloc Party fans who’d prefer guitars over synths, and are more reluctant to accept this musical evolution?

The answer, found after an hour long performance with plenty of gusto, thick lights and strobes, is a bit of both. His set mixes bouncy solo material, which feels more alive and fun than on his relatively underwhelming debut solo offering Boxer, with reworked old favourites, and this works both for and against him.

The songs from Boxer work better live, and that’s down to Kele’s performance. Every number has him bouncing around the stage and working up the audience no end. As such, On The Lam, Walk Tall and Everything You Wanted are turned from damp squids to dance anthems that soar.

Whilst all of this points to a bold future, there are plenty of nods to the past. A medley of Blue Light, The Prayer and One More Chance finds the latter benefiting from epic ’90s house-influenced stylings, while airings of Flux and This Modern Love all get a good reaction, but Tenderoni is the best received of the set, as befits his best solo song so far. From start to finish it is a song made for Friday nights and, even though it’s still early in the evening (9pm to be precise), everyone goes crazy.

Kele’s live show will certainly improve over time, once he starts making better and more consistent songs, and when he doesn’t feel like he needs to delve into the Bloc Party archives. But he looks happier, more at home, and is clearly having more fun on this career path than he ever was in his previous artistic life. Give him time to learn new tricks and develop his synth chops, and there’s a good chance that he will be unbeatable.