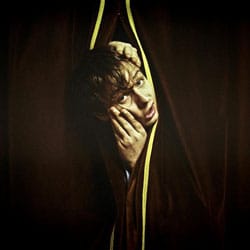 Kid Harpoon – or Tom Hull to his mum – has had quite a year. He’d already played hundreds of gigs, but had just two EPs to his name before, following several false starts, the turn of the year saw him improbably head to LA to record his debut album with the legendary Trevor Horn.

But it still wasn’t plain sailing. Reviewers gave the album Once a lukewarm reception and the fans, who lapped up his previous raucous, acoustic efforts, weren’t quite sure what to make of the new, polished Kid on the block.

Tonight he meets his critics and, bravely, he’s playing with a full band – the very thing that caused many to dismiss Once as over-produced and fussy.

The snappily named Hoxton Square Bar & Kitchen is packed in time for the support band, the Steve Lamacq endorsed Kurran And The Wolfnotes. Their chorus-heavy take on nu-folk has already earned them a fan base including Lamo, who squeezes his way to the front to snap away on his digital camera.

When Kid and friends – a guitarist, bassist, drummer and backing singers – take to the stage, it’s not just the number of people flanking him that’s different. With his new sound, there’s a new look too. The moustachioed Victorian cad is gone, replaced with a straight up shirt and crop. He looks proud as anything.

Album highlights Hold On, Back From Beyond and Stealing Cars get an airing, and it’s then that he downs his guitar, letting his band play on as he focuses on singing. It’s a strange sight – his acoustic guitar is more than just his trademark, it’s his weapon and his defence too. He usually thrusts it in the air, punching towards the crowd, giving them their cue to get stuck in. But tonight it sits at the side of the stage, redundant.

The album tracks are made for a full band and survive this temporary lull, but it’s with EP tracks Milkmaid and Riverside that he’s in his element. They’re shout-along, hard-strumming, drinking songs and the spontaneous energy that many have missed on the album is there in abundance. His lyrical knack is at its most obvious here too. He’s witty and poetically dry – a leftfield Alex Turner with a sprinkling of Joe Jackson.

For his encore, the band leaves while he stays, grabs his guitar and laughs, “I wasn’t going to do all that bullshit”. His version of Leonard Cohen’s First We Take Manhattan, a fan favourite, brings the old sparkle back – the rough edges mercilessly sanded down by Horn are in evidence and the audience goes wild.

One of the many reasons Once took so long to release was, Hull’s said, because with an album’s worth of songs ready to record, he flipped out. He didn’t want to be known as ‘that man in the pub with an acoustic guitar’. “Everyone just sighs when a man with an acoustic guitar walks on stage. I wanted to write pop songs that everyone likes,” he said. With Once he achieved that. It’s a clever album with some guitar-pop gems.

But while this new incarnation may be more record-friendly, he needs to better translate Once into a live show. His transformation from pub singer to pop star will then be complete.