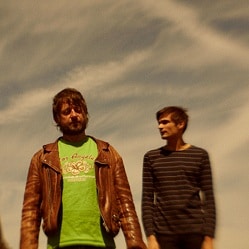 Such has been the acclaim for Diamond Mine, the fruits of a seven year collaborative process for King Creosote and Jon Hopkins, that they have taken it out on the road one more time. In the wake of a Mercury Prize nomination and several end of year album plaudits, the decision is a logical one, giving those late to the party a chance to sample the live experience in its understated glory.

Tonight the pair offer further proof that intensity can be found in the quietest of music as well as the loudest. At times the sound – and thankfully the audience – is so quiet that the tapping of Kenny Anderson’s shoe can be heard, quietly marking out the meter around which his sonorous vocals can wind. The down beats are punctuated by Hopkins’ thoughtful piano chords, while atmospherics trickle around the two like wisps of mist rising from the Firth of Forth.

For while we are undoubtedly in London, the vivid music – together with the field recordings that make the album such an unusual sonic experience on headphones – takes us straight to Scotland and the Fife coast. Maybe it helps to have been there previously, but as the slow moving components cast their spell, the crowd falls silent and moves there with the performers, the simple but heartfelt emoting taking centre stage.

It’s Anderson’s birthday, so he’s in a good mood, playfully inserting a line about ‘the birthday boy’ into the closing number, a warm hearted cover of The Only Living Boy In New York, or proclaiming that he’s ‘older than his teeth but younger than his tongue’! Prior to that, his mood is more thoughtful. As John Taylor’s Month Away considers how “I’d rather be me” than be the fisherman setting out for a month, ten miles east of Aberdeen, it is one of the most poignant moments of the night and clearly borne of personal experience. The same can be said of Bubble, where KT Tunstall makes one of several understated appearances on backing vocals. Tunstall worked with King Creosote and the Fence Collective long before becoming known as a solo artist, so their reunion is a homecoming of sorts.

Complementing these are sensitive interventions from two members of the band Geese, Emma Smith and Vince Sipprell, using their violin and viola respectively to make pinpricks of pizzicato or broader bow strokes, never impeding on Anderson’s vocals but adding an extra descriptive layer. It’s this careful attention to detail that characterises the performance and makes it so engrossing.

Earlier Francois & The Atlas Mountains cast a very different spell, bringing their debut album to an appreciative Shepherd’s Bush Empire with a mixture of contentment, carefree wit and finally energy. The distant influences of calypso and dub can be heard in Les Plus Beaux, where the band cause some quiet hilarity with their choreographed dance movements, but then the energy gradually builds to two stomping, percussive numbers that end the set. When the band reach these kinetic highpoints they recall Vampire Weekend, perhaps, but their other numbers give out a blissful contentment that goes with their endearing and relaxed nature on stage, suggesting they could not possibly be anywhere else.