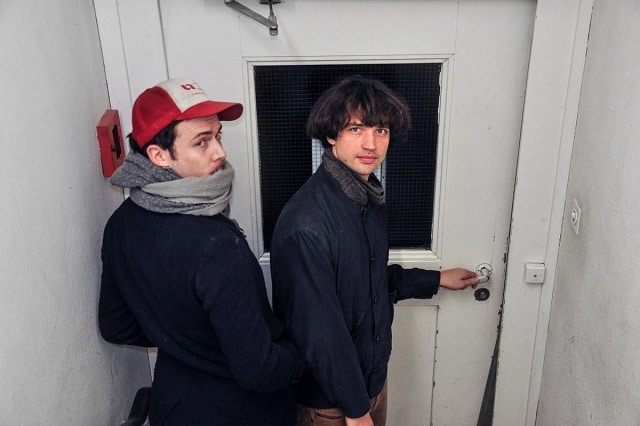 As they take their places onstage, front man Sevi Landolt sardonically proclaims “Yeah, it’s Klausy baby” to the delight of fans. Perhaps we should add a caveat here; there is no Klaus Johann Grobe, albeit not in the traditional sense at least. They’re actually a rather smashing duo of Landolt on keyboard and guitar, and the quietly phenomenal Daniel Bachmann on drums. Whilst touring they’ve expand their set up to a quartet with a bassist and second keyboardist, and by the end of the show this evening, they engorge to become a quintet, that fifth member being the intensely erotic support act Smoota, who early on amps up the atmosphere and the temperature with his sensual disco balladry, gold blouse and rather snazzy leather trousers.

Klaus Johann Grobe are promoting their third album Du Bist So Symmetrisch and here comes another caveat. The cheeky blighters aren’t even German, they’re from Switzerland of all places, but signed to the on fire Chicago based indie rock record label Trouble in Mind (home to Omni, FACS, Parsnip, and Mikal Cronin who have also all put out wonderful records this year) now they’re here touring the UK. The cover of their first record, entitled Im Sinne Der Zeit (which is a rough translation of The Spirit of the Times) depicts a happy young couple dancing in a social club or concert hall close with a balloon between their groins. It’s obviously nostalgic, personal and curiously intimate. At the time of its release five years ago, they were originally described as a krautrock band, but any trace of that relatively tired genre has long since been ironed out and replaced with something more upbeat and even a little camp.

In interviews the duo have repeatedly said they are making music as a response to the state of the modern world but this seems an anachronism, due to the effect of their songs transporting you a different time, one of innocence, optimism and sensuality. They have more in common musically with the squelchy disko of say Hall & Oates or more recently Daft Punk than they do the almost mindless repetition of Neu! They’ve cleverly replaced Popul Vuh for Pop Rocks and are all the better for it. At times tonight, they come across as a calmly Teutonic equivalent of The Carpenters, painfully saccharine on the surface with a slightly bittersweet delicious centre. Landolt is all humility and pensiveness as he scrambles to fit the words he wants to say within the structures of the melodies he’s creating, and, if we are to keep that comparison going, then Bachmann, who has come tonight dressed like he’s about to take Herbie out for a ride or steal some gold on the Riviera with Michael Caine, is totally the band’s Karen, their secret weapon.

It’s simply impossible not to react to the beat he’s putting down. It starts with simple nods of the head around the room, then toes begin to tap and then an array bums follow suit. They’re not two songs in before they have a dance floor in front of them. Managing to recreate the energy found on that early album cover, they’ve united an audience of ardent followers and recent admirers, and it is frankly wunderbar to watch. People who don’t know each other locks arms around each other and smile and laugh. Girls gyrate clumsily against one another, boys gyrate passionately against one another (in case you hadn’t realised, there’s a lot of gyrating tonight, courtesy of that naughty sexy Smoota) and by the time their final number Downtown reaches its climax we are all a sweaty mass grooving to a cowbell.

As the chorus to their song Ja! goes: “We all want yes!”