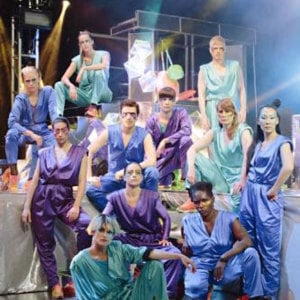 “Are you ready for shaking the habitual? Then shake yours,” a gender neutral being screams before 11 shiny blue and purple avatars waltz onto the stage and dance their faces off. To some, this might sound like a Pride march combined with an alien tribal dance-off. And it rather is. But it is also The Knife, one of the most intriguing acts in electronic music.

The Knife have garnered a cult following, despite releasing albums at irregular intervals and rarely giving interviews. Since the start of the Shaking The Habitual tour, the Swedish duo have been performing “shaken up” versions of many of their classic tracks, which were reworked especially for the tour of their latest album. These versions are played tonight and are generally more percussion heavy than the originals. Although we had that to look forward to, it was announced in August that The Knife were to “close down”, meaning that this Brixton Academy date is likely to be the band’s last ever UK show.

With that tension lingering, a heavy trip hop intro launches as the band start strongly with Wrap Your Arms Around Me, before getting the audience to clap along for We Share Our Mother’s Health. Both tracks sound dark and metallic, and contrast with the colourful dancers. Karin Dreijer Andersson (or someone who might be her?) flits around stage between songs, as if to avoid being in the limelight for too long. In some tracks, she leaves to sing backstage while the remaining dancers play more of an integral role. The “ho ho ho” of One Hit worked well with the crowd and the grunge scatter of Full Of Fire also sounded good, if a little prolonged.

The shaken up version of The Bird proved to be a highlight, bringing out the best in the suitably restless crowd, with a wooden flute solo accompanying Karin’s rabid singing and dancing (was it her?). Some of the other dancers sung the pitched down parts of the songs, with added timbre in both vocal tone and physical movement. The show looked amazing, with the dancers’ faces draped in gold face paint, their shadows creeping around on stain glass windows.

With Karin’s art school background, it’s not hard to see why The Knife’s shows are so visually orientated, and sometimes it felt like the show was more focused on that side of things, with the sound an afterthought. Yet neither the visual nor the audio aspects were given much attention in Ready To Lose. The audience concentration waned. The dancers were sat down resting and Karin (it was her, wasn’t it?) had done another runner to sing off stage. It felt confusing and rather like an interlude. But then the Shaking The Habitual tour has mastered in mistaken identities, the masking of gender and confusion from the off.

The lovely steel pans of Pass This On, from album Deep Cuts, made up for this. The dancers stir again, the deepened vocals blended bizarrely with a pair of the dancers slow dancing on stage. The show had kickstarted once more, but perhaps too near to the curfew. The duo finished on the shaken up version of Silent Shout, which felt more like an on-stage rave than a performance of a song.

Although the dancing was engaging and impassioned, it often didn’t feel coordinated with the music… and maybe that was the point. You were always guaranteed a good time seeing The Knife, but more attention to our aural pleasure, as well as the theatrics, could have resulted in an even better send off.