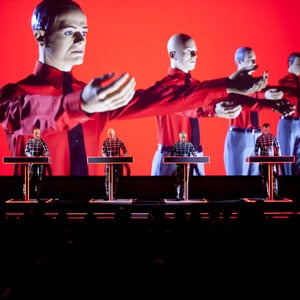 Their last studio album dates back to the technologically-backward 1986 and their last Parisian show to the electronically-deficient 1991. But despite the absence, the City of Music at La Villette in Paris is packed with fans wishing to escape back to the future for a couple of hours. A reference in electronic music, the Kraftwerk shows are part of the festival Villette Numrique (Digital Villette).

I sometimes wonder what their music would sound like if they wore lime green. In their perennial black uniforms of matching jackets and trousers, they stand guard facing their “instruments”. The rigid stance, straight and immobile, except for the fingers pressing the keys, give them an inhuman aspect. Sober and serious. Dark. You wonder if they’re robots, androids or maybe even mannequins. All their movements are performed with military precision. Maybe they – the real Kraftwerk – are backstage playing with knobs and buttons and dressed in human gear such as jeans and trendy trainers, drinking soda.

But no, these are”artistes”, creators of something new, something which is still, strangely enough, considered new. But only when they do it. They are the forefathers of today’s Fatboy Slims and Mobys. They are The Beatles of electronic music. Always inspiring, often copied, never attained.

Has Tour de France ever been used as a theme song to the famous French cycling race of the same name? What a thing to wonder at a Kraftwerk concert. The tracks sound timeless. The Robots take us on a trip on the Trans Europe Express, stopping by Pocket Calculator and The Model. Even the vocals are robotic – R2D2 sounds more human. But when the blues-electronica track Neon Lights kicks in, you realise only living objects can produce melodies.

They recount Orwellian tales and explore contemporary anxieties. The melodies are simple, yet domineering. The images on the screen depict art, retro and futuristic visions. The present in their presence seems to be the future. Wow, that word keeps coming up.

According to Kraftwerk, the future is here, it is now. It has always been now, whether that “now” was in 1974 or 2002. It is the “now” predicted in Autobahn almost 30 years ago by the foreseeing German androids of Kraftwerk. But strangely, it all still seems futuristic. This is the age of robotics and electronics, yet Kraftwerk’s ultra-visionary sound through laptops continues to fascinate. Maybe next time they’ll be making music through mobile phones.