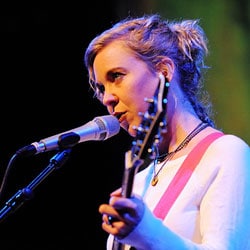 Live music doesn’t get much more personal than this.

Kristin Hersh, still referred to as “the former singer of Throwing Muses” after seven solo albums, has created a spoken-word-with-songs project called Paradoxical Undressing. It is unlike anything she’s hitherto staged.

Stood centre stage behind a single microphone stand and acoustic guitar, and in front of a floor-to-ceiling screen onto which was projected a compilation of captivating expressionist paintings, Hersh gently began to tease notes and strum chords. And speak.

The words she read from crib sheets, “inspired by my teenage diary entries, recently lost in a flood”. Most teenagers’ diary entries would not form the basis for a show at the delightful Queen Elizabeth Hall, but at the tender age of 14 Hersh formed Throwing Muses and found cult fame.

We hear of her early gig experiences, how 4AD Records founder Ivo Watts-Russell signed the band and the gory details of a car accident, all of it read from a detached point of view, as though the writer were observing herself. In her distinctive drawl she details ever more vivid hallucinations of snakes, lizards and other threatening/comforting animalistic presences as she heads chaotically towards the point of mental breakdown and hospitalisation, yet with a refined sense of comic timing.

Her detachedly trippy, semi-autobiographical poetry was broken up by stark, stripped-down renderings of songs the lyrics of which seemed to flow out of and into poetry segments, the flowing nature of the narrative punctuated only by fervent applause after each of the songs. A Hersh gig is always a treat, but with this spoken-words-over-music format (“art”, as she calls it) she highlights something not much remarked upon in standard gig circumstances: in a gig, her lyrics can be construed as obscure. Here they are placed into revelatory context; a narrative, a sense of a whole life leading to this point in time.

Tracks from her Throwing Muses canon were augmented by more recent solo material, notably from the very fine Sunny Border Blue album. Throughout, her all-seated audience were rapt; a sense of awe was palpable. Here we were being invited into someone’s mind and given a tour.

Brave, eye-opening, painfully vulnerable and soul-baringly defiant, Hersh’s Paradoxical Undressing is as raw as live music gets. With it she has stepped up a gear, revealing herself as a viscerally talented poet as well as the gifted musician and unique singer we already knew. It’s hard to think of any other artist who would have had the balls to stage anything like it.