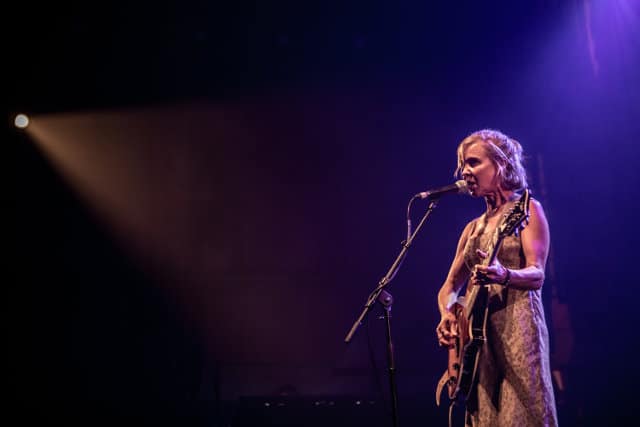 Kristin Hersh was among the pioneers of music crowdfunding, ending her contract with longterm label 4AD and striking out on her own, into a forever changed and still shifting landscape beset by falling revenue for all but the highest-earning musicians and no universal solutions for funding new music. Offering her new solo works free of charge while suggesting donations, she posted both unfinished and completed versions of new songs on her website, wrote a memoir, toured relentlessly – both solo and with a reconstituted Throwing Muses – and gave the impression of having made a decision that was working for her.

But in 2018, coincidentally alongside the return to London this very week of step-sister and Throwing Muses co-founding member Tanya Donelly’s band Belly, Hersh is to release a just-completed new album, Possible Dust Clouds, on an actual record label, Fire. Earlier this week she played a solo show at London’s celebrated home of folk, Cecil Sharp House, and tonight she appears at Robert Smith’s Meltdown, as one of a notable minority of female headliners.

All of this might be seen as a return of sorts to the limelight for her – or, for those who’ve noticed she’s never really gone away, business as usual. A musician’s musician with a fiercely loyal fanbase, it’s as good a time as any for the wider world be reminded of Hersh’s often psychedelic, stream-of-consciousness lyrics, her instantly recognisable guitar style and that voice, pitch perfect yet able to switch readily from soft lullaby to raspy scream.

Never one to make a production out of an appearance, she appears centre stage in the refurbished Queen Elizabeth Hall quite alone but for a guitar, says nothing and launches into a quiet start, with that rasp held in check to begin with as soft melodies imbue her hallucinatory, surreal wordplay. The initially empty chair to her left is soon taken by cellist Martin McCarrick, introduced curiously as someone who’s won at trampolining at an early age, and who proceeds to offer understated and unstinting support to Hersh’s arrangements. 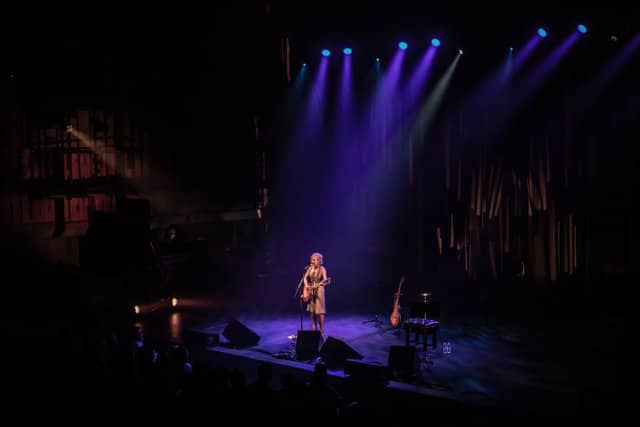 Mississippi Kite puts Hersh’s documented mental health issues front and centre, with ruminations on relationships and conflations of freedom and death. We also get Your Ghost, most famously a duet with R.E.M.‘s Michael Stipe but here sung by Hersh alone, giving its pining lyrics an unanswered-for-eternity feel. And we get Sunny Border Blue’s standout ‘pop’ moment Your Dirty Answer – with the blame-game line “it’s not my fault, not my fault you don’t love me… when I’m drunk”.

There’s space too for covers; early on, American folk staple Wayfaring Stranger, notably covered by Johnny Cash and Jack White amongst many others, benefits from a female perspective. Eventually there’s some addressing of the audience as she recounts a tale of two drunk sisters who she claims came up with Cuckoo, with her contribution merely being to write their words down.

The short set closes with a splendid raft of Throwing Muses tracks, including an imploring You Cage, Cottonmouth and White Bikini Sand, after which she’s swiftly over to the Clore Ballroom, where a considerable snaking queue awaits her signing prowess. She gives generously of her time as her new label’s staff look proudly on. While she’s never really been away, it feels otherwise – it’s great to have Kristin Hersh back.