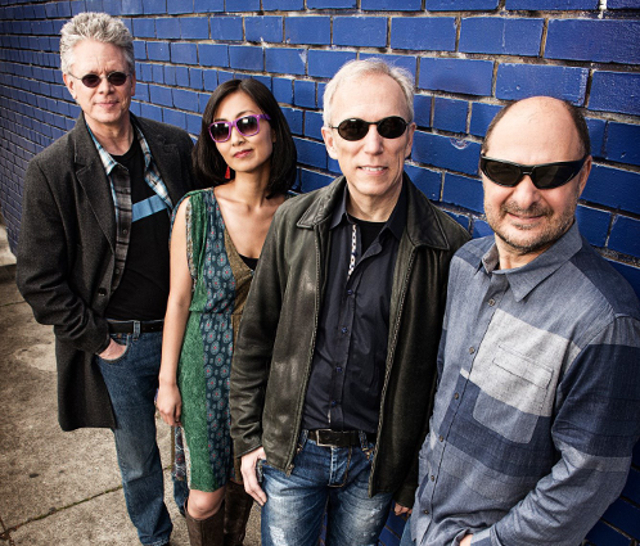 San Francisco’s Kronos Quartet have a phenomenal history behind them. Now into their fourth decade and fourth line-up change, they show no signs of easing off their forward-thinking, innovative, risk-embracing agenda. They lead a growing movement of contemporary ensembles like Bang On A Can, Eighth Blackbird & Alarm Will Sound,who are increasingly interested in interpreting works by artists from outside classical music circles. Tonight’s show at the Barbican was a typically boundary-erasing event that featured music from seven countries (Serbia, Armenia, Lebanon, India, Guinea, USA and UK) and also featured seven premieres.

The show was to also touch on two ongoing Kronos Quartet projects – Under 30 (where composers from across the world under 30 are commissioned to write a piece to be performed by the quartet) and Fifty For The Future (a similar series whereby new, especially commissioned pieces will be available online for future musicians to access and perform).  One of these pieces, My Desert My Rose by Alexandra Vrebalov, opened tonight’s show and balanced moments of anguished lyricism alongside exacting, driving momentum. Satellites by Garth Knox, another special Kronos commission, followed, striking a more skeletal tone, all transparent, microtonal, coalescing strings (complete with ‘air-shots’ from all four bows).

Later, we got excursions further afield. On Jacob Garchik’s arrangement of Sunjata’s Time by Guinea-based balafon player Lassana Diabaté, rhythms are established across viola and violin while melodies from the other members of the quartet interweave. It doesn’t sound too dissimilar to the music of Penguin Café Orchestra. It is followed by Reena Esmail’s arrangement of Dadra In Raga Bhairavi by Indian violinist N. Rajam. The trailing strings reveal hints of the ecstasies found within Hindustani music, with cellist Sunny Yang replicating the sound of the tabla by drumming on the body of her cello.

Terry Riley’s influence was also felt in the opening half, most specifically in the cosmic majesty of One Earth, One People, One Love and a surprisingly faithful version of Baba O’Riley by The Who (itself inspired by Riley). If anything proves Kronos Quartet’s powers of musical recasting, it’s their ability to polish a lumpen rock ‘classic’ into something that sounds much freer and more engaging. It also shows their impressive sense of dual vision: they’re capable of looking forwards and backwards simultaneously. In Seiche, the new piece written by Lau member Martin Green, we also get to see a new instrument. The Kronoscillator is a contraption that sees amplified plastic coils stretched out between stands, with various members of the quartet ‘playing’ them alongside their regular instruments. It’s an impactful piece and is also a reminder of the quietly experimental qualities of Lau.

Later, Groung by Mary Kouyoumdjian and Jacob Garchik’s arrangement of Flow by Laurie Anderson are more traditional, concise offerings before the main set is closed with Kouyoumdjian’s Bombs Of Beirut. It’s a slowly intensifying, thought provoking piece that incorporates personal spoken testimony of Beirut residents alongside the unadulterated sound of bombs and gunfire.

Their encore sees Garth Knox join them on stage to play viola d’amore on Ahmiel by John Zorn before they finish with a serene performance of The Beatitudes by Vladimir Martynov. It puts the seal on a remarkable performance that, in true Kronos Quartet fashion, sees musical styles, broader themes and geographical regions converge and be subsumed into one new, amalgamated whole.