by Steven Johnson
published: 23 May 2018 in Live Music Reviews
Tweet 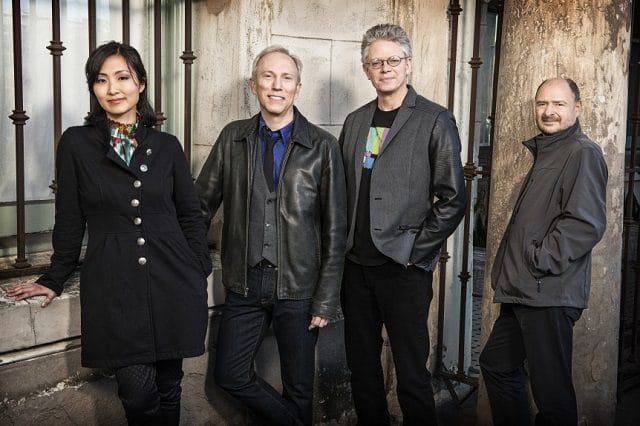 Kronos Quartet have now been in existence for over 40 years. In that time they’ve established themselves as one of the world’s premier string quartets, fervent believers in the power of new music and incredibly hardworking in travelling the world to perform it (they spend four or fives months of the year on the road). Landfall, released earlier this year, was a collaboration with Laurie Anderson, showing how they perform just as many non-classical pieces as classical. Last year’s collaboration with the Malian band Trio Da Kali further demonstrated this, and was to make up the second half of tonight’s show at the Barbican.

The first half featured a screening of the filmmaker Sam Green’s ‘live documentary’ A Thousand Thoughts. As images from Kronos Quartet’s history are relayed on screen by Green via his laptop, the quartet play key pieces and Green provides a running narrative on their background. Pieces by Philip Glass, Terry Riley, George Crumb, John Adams and Clint Mansell show their expertise in what could be termed their core genre of minimalist classical/soundtrack music. But it is the music created with the likes of Canadian throat singer Tanya Tagaq that arguably makes a bigger impression. Their performance by Meditation by John Zorn sees the quartet use their bows to dramatically cut through the air.

Time is given over to David Harrington’s aim of creating “bulletproof music” that can have practical, life-altering effects. Yet, alongside such admirable, serious ambitions there’s also a huge amount of fun and excitement within their playing (the way in which the film captures the unadulterated joy on their faces when talking about their music is one of the many highlights). Overall, it’s an awe-inspiring 90 minutes that reveals the sheer enormity of music and the overwhelming volume still left to be discovered.

In some ways however, it feels the quartet are more comfortable with the nature of the second half of the show – they’ve always preferred to look forward rather than back, and that’s what they do with their performance with Trio Da Kali.

They begin with Tita, which immediately displays a dual sensuality; the rich sound of the trio’s voices (frontwoman Hawa Kassé Mady Diabaté in particular) and the African instrumentation playing alongside the refined and resplendent sounds of the quartet. It shows there’s no distance between them, two forces musically unified. Kanimba meanwhile shows off the dancing sounds of the 22-key balafon, a marimba-like instrument which exerts a glinting, bejewelled sheen over the music.

Garaba Mama sees a further close blending of sounds before Fode Lassana Diabaté provides a virtuosic sign off on the balafon. God Shall Wipe Away All Tears is as melancholic and redemptive as the title suggests while Lila Bambo sways alluringly, the strings of the quartet accentuating the intricacies of the trio. Eh Ya Ye closes the set with its urgent rhythmical drive and they play an encore of Ladilikan to seal a memorable meeting of minds and cultures. We leave the hall safe in the knowledge that the Kronos Quartet continue to be an inspiring, revitalising force in music.