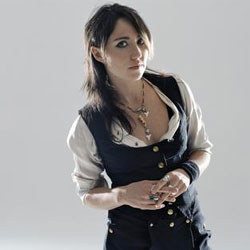 Back in the days before a major label record deal, a debut album that sold something like four million copies and more imitator-waifs than one could reasonably fell with a well-aimed swipe of an acoustic guitar, KT Tunstall plied her wares in little pubs.

The sometime Fence Collective figure and Mercury nominee tonight headed back, if not to her roots, then to somewhere near the base of her stem.

Pitching up in a south London boozer locally known for allowing household names to get back to playing intimately – members of The Who are amongst the Bedford Arms’ recent stage alumni – Tunstall was backed by two shimmying vocalists and longtime drummer and fiance Luke Bullen.

Wall-to-wall adverts for one of London’s commercial radio stations surrounded the lady known to her parents as Kate, a reminder, if one were needed, of how mainstream she’s become since her first appearance on Later With Jools Holland blew an audience away and announced a star to the world. One of the station’s DJs even roused the crowd for her entrance. For a lady who started her musical life as a folk artist, it was somewhat incongruous.

Early on, memorable ballad The Other Side Of The World, a track that led KT to be compared with the none-more-insipid Dido, was stripped back, losing its harmonies. With a roughened edge it didn’t suddenly become a punk song, sounding more like a demo version of the Steve Albini-produced recording from Eye To The Telescope. Songs from second album Drastic Fantastic, many ostensibly in a similar vein, were clapped away politely, lacking bite and floating by with few hooks to make them memorable.

“You’re a very Japanese audience,” KT announced, going on to explain that in Japan crowds at gigs are pin-drop silent during songs and reserve their clapping to the moments between. True, Balham’s denizens this evening were never likely to riot. But then Tunstall’s music is not exactly stuff to start riots to.

Black Horse And Cherry Tree, buried half way through the set, was unquestionably the moment of the evening. A few false starts were testament to the live experience, KT laying down samples of beat and vocals that immediately had toes tapping and even some hands clapping. She seemed to enjoy herself. But it was the exception to the rule.

At other times, elements of the audience seemed disinterested, chatting away just a few feet from the front of the stage. Maybe they’d seen the set list at the beginning which suggested an appearance from The Bard of Barking, Mr Billy Bragg, and were waiting in anticipation. As it turned out they’d be waiting a while, for he failed to show up and the set list bore no relation to what was actually played.

The main set ended with a rousing version of Suddenly I See, a breezily confident moment that underlined how good Tunstall can be. For an encore she conjured the pop spirit of the Jackson Five for a cover of I Want You Back that sounded suspiciously like Black Horse And Cherry Tree with different lyrics, but the drivetime audience lapped it up.

KT Tunstall plays the Hammersmith Apollo in something like six weeks from now, when presumably a full band will back her. But her guests this evening distracted from the raw talent that marked her out to begin with. She’s at her best when she’s strumming, sampling, stamping and singing. It was when she stuck to that core that she was most impressive.