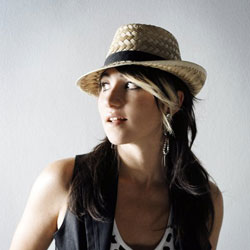 She’s always been a bit misunderstood, KT Tunstall. An early member of the gloriously eccentric Scottish folk outfit The Fence Collective, whose debut single was a fantastically weird concoction of folk and blues performed with a loops effect pedal unit, more recently she’s been lumped in with the Katie Meluas of this world.

Her new album Tiger Suit tries to address this problem. While still displaying her uncanny knack of writing a thoroughly listenable pop song, this time round there’s electronic beats and synths. It adds up to a self-declared new genre of ‘nature techno’. If that sounds decidedly horrible, it’s nonetheless resulted in the best album of her career so far, and it certainly hadn’t frightened off her loyal army of fans who had packed Manchester’s Ritz to witness her return.

Firstly, Sheffield’s Slow Club were their usually endearingly self-deprecating selves (“we’ve just been named Number 1 on the NME Cool List…! Nah, have we hell. I think we’re Number -102 or summat”) for a very well received support slot. Highlights from debut Yeah So were played, although the new material like Rotten Mouth and Gold Mountain indicates that their second album could be something really special.

Yet there was just one person who Manchester was waiting to see. Even casually dressed in leather leggings and baggy t-shirt, KT Tunstall just oozed stage presence. As she strapped on a guitar that looked bigger than her, her band launched into Tiger Suit highlight Glamour Puss. Former Ash guitarist Charlotte Hatherley has been added to the line-up this time round, and provides some muscle to the Tunstall live experience.

Her setlist leaned understandably heavily on the new album – in fact, every single track from Tiger Suit was aired tonight. Yet every track was greeted like an old friend, especially the gorgeous, lilting acoustic Still A Weirdo, a contender for Tunstall’s best song yet. She was also relaxed and chatty on stage, explaining the themes behind many of the new songs and gratefully accepting a toy tiger from the front row.

The entire band took to the front of the stage to swap instruments for a percussive-heavy version of Hold On, but the highlight of the night was a throwback to her early days, when alone on the stage with just the famous loop effects pedal for company, she performed a stunning Other Side Of The World and a spine-tingling Black Horse & The Cherry Tree.

If there are quibbles, you could say that the reliance on Tiger Suit meant that there was no room for old favourites like Universe & U or Another Place To Fall, and the fact that the average age of the audience seemed to be rather higher than usual meant that the energy displayed by Tunstall and her band wasn’t particularly replicated in the crowd; some rhythmic nodding of heads and the odd outbreak of clapping was as wild as it got in the Ritz.

However, she does what she does incredibly well, and a quirky sense of humour makes her more endearing than standard-issue pop stars. An encore consisting of an acoustic Heal Over, a cover of Erasure‘s A Little Respect and a celebratory Suddenly I See ensured that the evening ended on a high note and the career of the diminutive Scottish lass with a seemingly never ending collection of guitars goes from strength to strength.