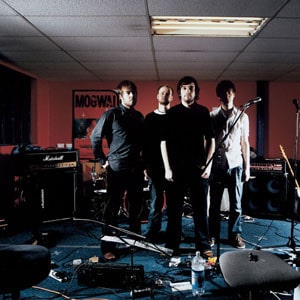 While the likes of Bloc Party, Maxïmo Park and Hard-Fi are grabbing all the headlines and Mercury prize nominations in 2005, there are undoubtedly a handful of bands waiting in the wings to fill their shoes next year, when the aforementioned groups will be hauled up in the studio working on their ‘make or break’ follow up albums. We just haven’t heard of them yet.

Tonight at the Dublin Castle, a small pub off Camden High Street, there were three bands on the bill who would all like to think of themselves as strong candidates for the dizzy heights of commercial and critical success in the course of time – and judging by the quality and incisiveness of the sets they played, should have their odds to realise this slashed dramatically at the local bookmaker.

The Cinematics took to the stage first. They hail from Glasgow and are sharply dressed, with their lead singer looking a cross between Ian Curtis and Franz Ferdinand‘s Nick McCarthy. It is the latter observation that is perhaps more significant.

Their sound, as you would probably expect from their description, is not dissimilar to that of Franz Ferdinand’s – full of mordant guitars, enthusiastic singing and big, memorable hooks.

Highlights included the rather dramatic opener Trapped, as well as Wake Up, which has all the hallmarks of a hit single – Here the constant refrain of “Wake up, wake up, we’re almost there!” stuck in the memory for hours after, a sure sign of a runaway smash. They may not be wrong, either – some proper production and reasonable commercial backing should see them go far.

redcarsgofaster were an altogether different prospect – a quintet from Leicester, the small stage could barely accommodate all of them. Comprising of two guitarists, a bassist, a keyboardist, a drummer and a lead singer, it was also clear as soon as they started playing that the intimate surroundings of the Dublin Castle were far too confined for their vast and intensive sounds.

The guitars were in full flow, the drumming was venomous and front man James Summers was seemingly possessed, unable to stand still for a second. Their 25-minute set was a tidal wave of noise, and had the audience transfixed throughout.

Obvious comparisons would point to Gang Of Four and more latterly Mancunian dance rockers The Longcut, with Summers’ cold, deadpan vocal delivery recalling those of Jon King in particular. But redcarsgofaster have an extra dimension to them; copyists they are not – something which should see them emerge on to the mainstream imminently.

It was then left to headliners Kubichek! to close proceedings, which they did in style. They were on stage for about half an hour, and during this time the audience’s eardrums certainly took a bashing – this was a streamlined barrage of ringing guitars and mechanical drumming from the Newcastle four piece that certainly fitted their very own description of ‘abrasive pop.’

The sound was rather fuzzy, meaning it was difficult to hear what was being sung, but beneath the full on assault it was able to detect some great, danceable melodies, not least in forthcoming single Nightjoy and fabulous set closer Hometown Strategies, both of which you can imagine being turned into mobilising anthems at indie discos upon their release. Along with bands like Death From Above 1979 and Test Icicles, they make a huge and thrilling racket.

This was a fascinating evening of new music, and more evidence to suggest a thriving underground scene in Britain. It’s also safe to say that at least a couple of these bands, if not all, will be thrust upon us before too long, as and when they get round to putting out some material – the quality songs are certainly there in abundance, which is a good a start as any.