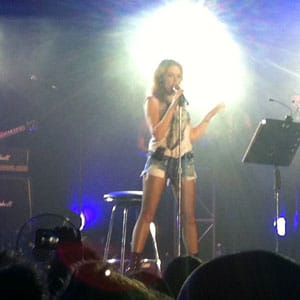 It’s impossible to listen to Kylie Minogue’s biggest hits without visualising an accompanying glossy pop video or a high concept, heavily choreographed tour. This year, Kylie celebrates 25 years in the industry – or as her marketing machine calls it, K25 – and in an interesting move, the Australian pop princess is not marking the milestone with a lavish greatest hits tour.

Instead, just last month, and without much fuss, Kylie announced two Australian Anti-Tour shows, an intimate concept – which is highly strategic in itself – intended as a reward for the unwavering, obsessive enthusiasm of her superfans. In the weeks leading up to the Anti-Tour dates, Kylie was insistent these stripped back shows would feature no extravagant sets, no spectacular lighting, no choreographed dancing, no costume changes and most importantly, no hits.

Kylie promised a set filled with b-sides, unreleased rarities, album tracks and fan requests, and it’s no surprise that both shows – one in Melbourne and one in Sydney – sold out within minutes. Two more shows in each city were announced almost immediately, staged just an hour after the first show in each city ended.

Bouncing on stage at 11pm for her final show at Sydney’s Luna Park, and launching into the taut Magnetic Electric, an electro-rock cast off from her 2008 album X, Kylie’s playful grin set the tone for the rest of this eclectic, sweaty show. Backed by a stripped-down, well-rehearsed four-piece band and three backing singers, Kylie had to rely solely on her command of the stage. Although Kylie will not go down in history as one of pop’s great voices, her vocal control and delivery has improved dramatically, and for the most part, she exceeded possibly even her own expectations.

Technically speaking, this isn’t Kylie’s first intimate tour. Back in 1998, just after the commercial disappointment of her Impossible Princess album, Kylie staged a series of small-scale shows, but during that time in her career, she actively distanced herself from her pop roots, as if she was ashamed and embarrassed by the music – and the fans – that made her.

This time round, though, Kylie has completely embraced her past, and when she performed the hi-energy Stock Aitken and Waterman fan favourites Made In Heaven, I’m Over Dreaming (Over You) and Always Find The Time, she wiggled, winked, and shook with reckless abandon, as though she was almost relieved to celebrate stepping back into time.

On recent Kylie tours – especially the epic Aphrodite – Kylie has literally been dwarfed by costumes, hydraulics, and even the rigid stage management that such a show demands. Tonight though, even though the show still had a structured sheen, Kylie was completely relaxed, joking with fans, giggling when she forgot the lines to a song, and dancing to the beat of her own drum on stage.

Famously protective of her personal life, tonight Kylie also provided a glimpse into her private world when she sat down and offered a song that she wrote “for a departed friend”. Bittersweet Goodbye, a highlight from her Light Years album, was clearly written in memory of Michael Hutchence, and her performance was genuinely sweet and introspective.

Although Kylie threatened she wouldn’t be singing any of her singles, she did sneak in three hits that she wouldn’t have dared perform a decade ago, the bouncy Got To Be Certain, Tears On My Pillow and a decent acapella version of the wildly underrated Word Is Out.

Clutching a nylon scarf from her 1990 tour (“I don’t think there’s a single natural fibre in this gorgeous piece of memorabilia”), Kylie closed her show at 1am with the joyous rave anthem Enjoy Yourself. As the audience was bombed with glitter, Kylie bounced back off stage, and 25 years later, she’s still clearly enjoying herself, and more importantly, eternally grateful to her fans.