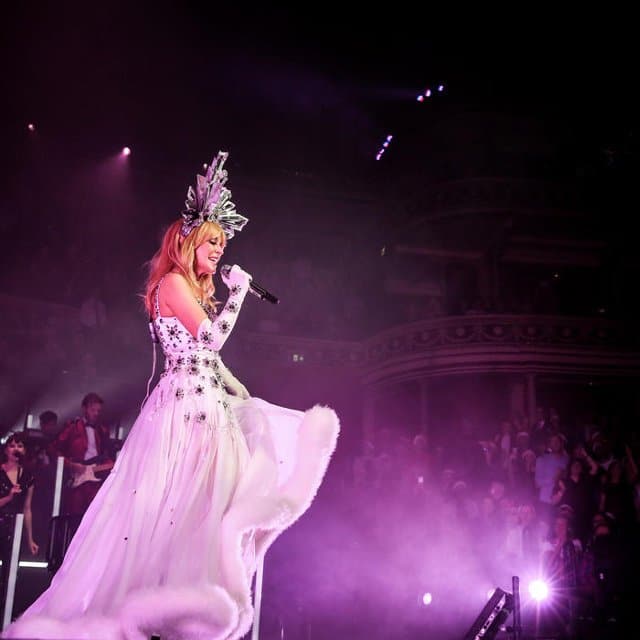 Christmas and Kylie Minogue might as well have been made for each other. Returning to the scene of her 2015 Royal Albert Hall debut with a winning mix of back catalogue bangers and Christmas classics, her performance is set in a big production format across five acts. She is joined by her band, backing dancers, a concert orchestra, guest stars and the National Youth Choir of Great Britain. With a celebratory audience in santa hats delightedly lapping it all up, the sometime soap princess is here the fairy atop the Christmas tree, heralding the beginning of the festive season and worshipped by the good time seekers who surround her.

Each of the acts features costume changes for the star and her astonishingly supple dancers. The reveal of one of these costumes brings about some of what sound like rehearsed lines – “It’s just a little something I threw on,” she trills about a spangly mirrored outfit on the first night – amid the heart-melting grins and cheeky poses. She never seems less than overjoyed to be there on the stage, the roars of the crowd in her ears, their adoring faces urging her on, and looks close to tears at one point at all the adulation. “We’ll have no humbugs here,” she counsels, and who would dare to disagree.

Guest stars appear in the form of a streamlined, besuited John Grant on arguably her finest song Confide In Me, his booming baritone a wonderful counterpoint to her girly soprano. It’s a duetting phenomenon that began when she guested in his Albert Hall show, singing on Glacier, and suggests that there could there be legs in a duets album for these two. For his part, Olly Alexander of Years And Years looks like the cat who got the cream, almost unable to believe he’s singing with actual Kylie albeit on the none-more-conservative Better The Devil You Know, grinning from ear to ear and harmonising delightedly. And Katherine Jenkins offers up something of a gay majorette superhero star turn, opening the second half with forceful operatic power on Your Disco Needs You. She’s opposite Kylie sporting a rainbow dress as the dancers wave giant rainbow flags overhead, because together, Kylie and Christmas just weren’t gay enough already.

There are covers great, and covers not quite so. Some of the covers are not strictly Christmas-related. Yet Kool And The Gang‘s Celebration, Rozalla‘s Everybody’s Free (To Feel Good) and The Bee Gees‘ Night Fever slot in to the set as if they were meant to be festive favourites. Paul McCartney‘s tedious Wonderful Christmastime is amongst the flabbier moments of the 25-song set, as is East 17‘s Stay Another Day, mercifully dropped for the second night.

But her sultry change of pace on Carole King‘s The Loco-motion – which she’s long since made her own, even more than Lulu did – and Eartha Kitt‘s purry Santa Baby underline Kylie’s versatility as an interpreter of songs. This is grown-up music for lovers, several steps removed from the cheese, and an opportunity for the orchestra’s brass section in particular to show off. But there are no complaints either about Andy Williams‘ It’s The Most Wonderful Time Of The Year, which sets the tone at the start of the evening, or Wizzard‘s madcap perennial I Wish It Could Be Christmas Every Day, which plays out the evening perfectly as confetti and balloons fall from the ceiling.

The end comes surprisingly swiftly with Especially For You – minus Jason Donovan, she asks the audience to duet with her instead. And while the lack of the likes of I Should Be So Lucky and Timebomb are only to be expected from a set so heavily reliant on seasonal covers, her own material in the form of Spinning Around, Can’t Get You Out Of My Head, Love At First Sight and Come Into My World keep the fans happy.

In pulling these return shows off, Kylie Minogue underlines just why she’s been around as long as she has – certainly she thrives on good will, but her talent as an entertainer is what sustains it. As a concept, Kylie Christmas is almost too perfect – if you love Kylie and Christmas equally, you’ll love this.