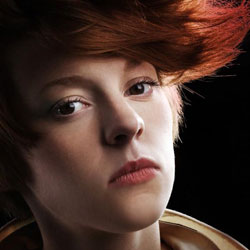 Ahead of headliner La Roux, it’s a surprise to be able to hear support band Delphic above the scratchy sound created by sweaty legs rubbing against tight denim.

Kentish Town’s Forum is, for one night only, practically a sauna, with young kids flopped forlornly over chairs, or propped against bars, their over-sized t-shirts and skinny jeans clinging mercilessly to their non-existent hips.

Delphic try their best to raise the energy levels, but end up coming across like an endless remix of an Editors song, all polite keyboard washes and urgent, repetitive guitar riffs.

It doesn’t help that they don’t pause between songs, with each one bleeding into the next, leaving the already lethargic crowd to drift off. A low murmur begins to drown them out.

Not that it really matters, of course. Everyone’s here to see the newly crowned Queen of electropop, the one act that has managed to fully transcend being billed amongst this year’s ‘ones to watch’ and become a bona fide pop star. At this moment, second single proper Bulletproof sits on top of the UK singles chart, with the debut album currently being kept off the top only by the late King of Pop.

There’s a palpable sense of excitement as the three members of La Roux’s touring band – one half of La Roux, Ben Langmaid, restricts his input to the studio and isn’t present – drift out to take their places behind a stack of keyboards and a electronic drum kit. The stage is styled like the Top Of The Pops set circa 1989, with pulsing reds and greens and bars of light dotted around.

As the ping-pong beat of Quicksand rings out, the face and voice of La Roux, Elly Jackson, strides out from the wings, her ridiculous quiff almost entering before her. Bedecked in a cream suit, made up of harem pants and a cropped jacket, she looks like Miami Vice-era Don Johnson mixed with Annie Lennox. As she greets the front row she’s blinded by the flashes of a hundred camera phones.

The most immediate observation is how confident Jackson suddenly is. Her habit of hunching over the microphone, all angular shoulders and crouched posture, seems to have gone completely, replaced by a definite stage presence. She’s also picked up some moves and spends most of the short set cutting a rug in front of a wall of lights that at one point spell out ‘La Roux’ in four foot high letters. During the fantastic Tigerlilly she conducts the audience, sliding from one side of the stage to the other, whilst the pure pop of I’m Not Your Toy finds her giddy with excitement.

Unfortunately the sound is so bad that a lot of the songs get lost amongst the reverb and the heavy bass. Colourless Colour is a brilliant song swallowed by a pulsating thrum that reverberates off the walls and mixes into mulch somewhere in the middle, whilst slower songs such as Armour Love and As If By Magic leave little impression. Halfway through the problem is partially resolved when Jackson’s vocals are turned up and the music down, which is fine if you recognise the songs but of little use to a crowd who have only had two days to learn the words.

It’s not a problem of course when that familiar intro starts up and In For The Kill works its peculiar magic. An odd song that somehow works despite itself, its effect is incredible, the audience screaming back those high-pitched backing vocals like their lives depended on it. Jackson is well aware of the song’s power and amps up the vocal hysterics to an ear-bleeding crescendo that’s as fun as it is disconcerting.

Bulletproof was always supposed to be the song that broke La Roux, the sure-fire single after the experiment that was In For The Kill. Somehow, its job had already been done and instead its route to the Number 1 spot was seamless. It’s easy to see why. A bouncing, joyous pop concoction that sounds simultaneously dated and forward thinking, it also possesses a chorus the size of a continent. If the measure of a song is how well it works live then this is a gold-plated standard, the crowd roaring the words with their eyes shut in drunken euphoria.

And that’s our lot. As the song ends Jackson and the rest scuttle quickly off stage, ‘La Roux’ still burning bright at the back of the stage. As the house lights go up there’s a hint of a boo here and there, the 40 minute set whizzing by before anyone could catch their breath. Perhaps, given the heat, Jackson felt it best to let us get outside sooner rather then later. Maybe she needed to get out of those harem pants, put on some joggers and relax that fringe of hers. Whatever the reason, she left the crowd wanting more and that, surely, is the point?