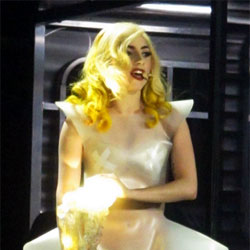 Locked outside the O2 Arena there exists a decreasing minority of pitiables who still, despite all evidence to the contrary, see Lady Gaga as a generic pop bimbo. We’ve seen her like before and will see her like again, they muse, drooping soporifically into armchairs and adjusting their pipes as they tut and sigh.

If you meet one of these relics and hear them utter such manifestly daft views, laugh in their face. Lady Gaga is a genius. Tell them so.

Since the release of the now 10million-selling The Fame she has, in the space of little more than a year, taken over the pop planet. Stepping on Madonna with Gwen Stefani‘s best shoes, she’s written music designed to make herself huge, to allow her to bestride an era and to get it dancing. But it’s the visual feast, and her charismatic central role within it, that brings this material to life.

This whirlwind performer’s new show The Monster Ball is breathtaking in its technical innovation and visual spectacle, its sheer scale. There’s so much detail to take in; the appearance of a harp, a violinist, uncountable masks, wigs and a dizzying assortment of costumes and sets are subsumed within the grandeur of a big picture thought through from the start.

From beginning to end the show traces a narrative, rather as a musical or an opera might, and is divided into distinct acts – City, Subway, Forest and Monster Ball – as she gathers her little monsters around her and they journey to the fabled ball. As with all fantasy journey narratives, from The Odyssey to The Wizard Of Oz, along the way obstacles must be overcome, truths must out and bonds must be broken, tested, formed.

Arriving 40 minutes late behind a wraparound curtain, Ms Germanotta strikes silhouetted poses to Dance In The Dark, each choreographed movement deliberate and spotlit and cheered to the rafters. At the song’s close the curtain rises to reveal an urban New York night scene replete with flickering neon signs (“UGLY” “SEXY” “LIQUOR”), fire escape stairwells and even a yellow cab – which has broken down. But with GaGa on hand, the night is not lost. She lifts the hood, tinkles a few bars on the synth that’s tucked away in her engine and, sporting a carnevale mask, launches into her first hit, Just Dance.

Whether dancing, strutting about with a keytar or plucking the strings of a harp, Gaga stuns with her showmanship. Her music, especially from The Fame Monster, is the very definition of what pop is – songs for a minority who will become the new majority; her appearance and background aside, this is where she most carries Madonna’s torch forward. Describing the concept of her creation amid her buff male dancers she says, “The Monster Ball will set you free. All the freaks are outside and we lock the fucking doors. It’s a place you can be whatever you want to be, no matter who doesn’t believe in you.” As she poses with the dancers at the close of Boys Boys Boys for the benefit of hundreds of flashbulbs, the point isn’t lost that Madonna could’ve uttered that same line at any point in the last 25 years.

Several costume changes later and she exhales heavily into her headmic, recovering her breath as she absorbs her rise to the top. At the close of Telephone she points the spot beam of her “disco stick” – something like an Olympic torch – at faces in the crowd and reminds us that just a year ago she opened in this very space for the Pussycat Dolls. She thanks “all my gay boys” who first believed in her.

Later she has a wardrobe malfunction. Sat at her grand piano she says, “My shoe broke. But I would rather die than have you see me without high heels on.” And then, demonstrating her self-awareness, she adds, “That’s what showbiz is all about,” before launching into Speechless, which is transformed into the pivot around which the rest of this set revolves. A classically trained pianist, at the piano she’s revealed as an all-round cabaret star; a close-up camera captures her every touch of the keys. Lyrics drip with pathos, referencing a “half-wired broken jaw” and “Johnnie Walker eyes”. She dedicates the song to her father; her parents are in the audience.

A wraparound graphic screen descends on to the podium as she changes costume for the umpteenth time, transforming into a snow queen with a dress sporting an independenly operating headdress and angel wings. We’re just absorbing the incredible intricacy of this couture creation par excellence when a hydraulic lift raises her skyward, that she may better survey her domain.

With the stage now dressed as a forest, it doesn’t let up from there. Teeth gets an extra glug of drums to break up the slogging, enslaving beat and is followed in short order by the lush Ace Of Base-esque Alejandro and Poker Face, a song that already sounds like a prototype for the life-movie of What Gaga Did Next.

Paparazzi is represented by a 40 feet high thing, an amalgamation of a piranha’s face and an octopus’s tentacles. These thrash about as the mouth juts forth, the teeth snapping, the eyes malevolent in their hunger for prey. As only she can, Gaga subdues the beast; sparks fly from her breasts and crotch, turning her into a one-woman firework display and clearing the last obstacle on the way to the ball.

And then… “RA RA AH AH AH ROMA ROMA-MA GA GA OOH LA LA I WANT YOUR BAD ROMANCE”. The most monsterist of her monster hits so far is ecstatically received as 18,000 backing vocalists pick their vocal line and sing it at the tops of their voices. As each climax paves the way for a greater climax still, the inescapable truth was writ large: Lady Gaga, self-created fame monster, is going to enjoy fame for a very long time.