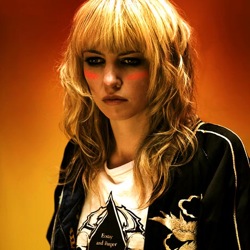 It didn’t bode well. It boded badly. Being propositioned at the door – that happens a lot – you know how it is. But the questioning, the questioning was unusual.

The disappointment in his voice was tangible. Remarkable. Unmistakable.

OK, I haven’t, but that isn’t the point. I could have. I may have. But this is just assuming that any and every possible achievement can be summarily dismissed due to the fact that upon flushing the toilets in the hospital of my birth, the water would disappear down the plughole in the opposite direction.

The gig was disappointing. Ladyhawke was disappointing. Perhaps she also hadn’t had her life validated by the doorman from New Zealand. Had he asked her, he’d have got the affirmative response his plaintive sighs seemed to suggest he’d been longing for; confetti cannons would have been fired, bunting unfurled, a cake presented and a waddlepast of kiwis arranged.

It didn’t live up to expectations. Maybe they were too high. After all, first gig for two years, first airing of new songs – nerves were always destined to be rife, but the degree displayed here was still surprising.

Many of the negative points were environmental. The sound of the 100 Club was muddy and without definition. So the initial burst of new tracks, Blue Eyes and Anxiety, sounded a bit grungy and a bit flat.

But look. There were positives – the new songs weren’t awful. Quick And The Dead has both a wakka-wakka noise from a ’70s Blaxploitation film and a beat reminiscent of My Doorbell by The White Stripes. Black, White And Blue errs on the side of rockier than some, but is none the worse for it. In fact, nothing here was lacking potential, it just hadn’t quite fully bloomed yet.

But overall, it was an unsteady return.

Although, maybe all of this is unfairly tarnished by the handing out those backpacks of colossal disappointment on the door.