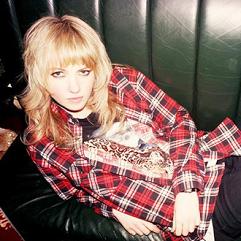 It’s becoming something of a clich to describe Ladyhawke – 26-year-old Kiwi Pip Brown to her friends – as a 21st century Stevie Nicks.

Sure, the similarities are obvious. She writes, for want of a better term, uncomplicated pop music drenched in synthesisers, and is remarkably good looking, in the kind of kooky, floppy way that the queen of Fleetwood Mac was in her prime.

However, her astute remoulding of mid 1980s pop is becoming so much of a unique selling point that it’s already threatening to overwhelm the chatter around a very talented songwriter – yes, she writes throwback songs, but do we really need to be reminded through countless Thriller-inspired music videos? Certainly in a sudden clutch of talented female singer-songwriters Ladyhawke needs something to differentiate herself – and, so far at least, we’re still buying it.

The buzz around her has become so intense that tonight King’s Cross’s Scala is jammed to the rafters with an encouragingly diverse audience – both aging rockers and young hipsters wearing leopardskin tights crowd the balconies straining for a glimpse of the bashful Miss Brown.

If, on her admittedly fantastic eponymous debut album, Ladyhawke can sound a little polished, tonight she muddies up well, injected an unexpected and surprisingly powerful grunge element to the mix and riffing off a second guitarist to give the proceedings a much more steely-eyed, Courtney Love feel. It’s a trick that pays dividends, especially on her less well-known songs. Opener Professional Suicide, a thumping middle finger salute to an ageing 80s pop star (careful Pip, hands/feeding) is brilliant, like the Breeders in their absolute prime, with a vicious sideswipe about “I see you had a hit back in ’89/ Too bad we all don’t age as good as wine”.

Better still is Magic – surely a shout for a forthcoming single release – which bolsters its already pretty formidable industrial bombast to ape – nay, become, New Order’s True Faith (which is, in these eyes at least, a Very Good Thing). Even little-known B Side Danny and Jenny seems to appear fully-formed into the world, a tiny, rocky aside in a set of iron-clad pop moments.

Brown herself is an engaging, if terminally reserved frontwoman. Clearly excited, and a little overawed by the size of the crowd practically dangling from the upper reaches of the venue, she giggles and gasps her way through the set, although without any of the faux coquettishness you’d find at the nearest Katy Perry gig. At one point she treats the audience to a faltering monologue about the tuning of her guitar, which, to her eternal credit, endears much more than it annoys.

And herein lies one of the strangest aspects of Ladyhawke’s live show – she’s so completely different in the flesh to her promotional material that, if it wasn’t for the unruly mop of blonde curls and vaguely retro oversized t-shirt, she could be someone completely different. Take for example the video to lead single Paris is Burning – here she delivers the vocal hunched over the microphone like a pre-Pixies comeback Kim Deal, the complete opposite to her pouting, Kim Wilde inspired video performance.

It’s almost as if the girl, who has admitted suffering from a mild form of Aspergers, can hide her obvious gawkiness on film, but confronted with a crowd of hipsters she’s unable to hold her nerve. I’m not accusing her of being a fake here in any way – quite the opposite. Tonight we see a real human side to a wonderful artist that, if you’d only watched the videos and seen the promotional pictures, you’d never experience.

For the rest of the set, she turns in well-rounded versions of even the most synth-heavy songs on the album, including a killer version of Dusk Till Dawn, which manages the difficult feat of balancing the lyrics “Do do do do, Do do do do, Bang, bang bang on the wall, from dusk till dawn” with a superbly-crafted melody to make it sound cool, refreshing and vital. Another highlight is the – and I’ll admit there’s a clich coming in here – Rumours-alike Back of the Van, a big, silly, Van Halen style power ballad with a surprisingly tender heart. And if that sounds like a bad thing, it certainly isn’t.

Ladyhawke’s star is in the ascendance, and if she keeps turning out concerts like this it can only rise higher into the firmament. A little short – perhaps more material is needed to keep up with the likes of MIA – but the retro-look seems still to be working for her. She might seem like a reluctant popstar, but you just get the sneaking suspicion that underneath the retro haircut there’s a serious songwriter waiting to come out.