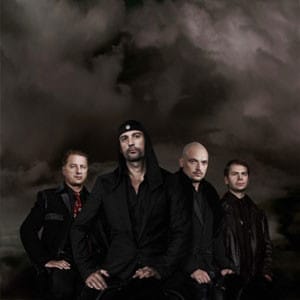 Since their inception in 1980, Laibach have been continually ruffling feathers whilst winning hearts and minds in roughly equal measures.

As a part of the NSK (Neue Slowenische Kunst – New Slovenian Art), a political Art Movement, they worked alongside theatre groups and painters towards utopian political goals. While they have frequently been pigeonholed with the terms “industrial”, or EBM, they have never really stood still. They have evolved from album to album, and tour to tour, but always retaining something that made each step sound like quintessential Laibach.

One thing remains certain: they still have the power to knock even the hardiest gig goer into submission.

As the house lights fade and the PA begins to play the orchestral intro-tape for what seems to be a good fifteen minutes, the assemble throng fall deathly silent. The band take to the stage, a solitary voice from the audience yells out “Schnell”, and for just a moment the pomp and ceremony of the event gives way to laughter.

But the laughter soon fades, and Laibach launch into a set honed to military precision (indeed Status Quo‘s You’re In the Army Now gets an early outing in the set).

Tonight’s audience seems to come from all walks of life, from your garden variety fetishist, through the coffee table trendies, and finally on to the chin stroking college professors at the bar. Most worrying though is the presence of a small Nazi faction towards the back of the hall, which, at various parts of the set begins sieg heiling.

It would appear that Laibach’s message is lost on quite a few people. They were “outed” as an anti-nazi band many years ago, but it would appear that the Germanic, Wagneresque elements of the music, and the imagery they choose, still attracts certain elements of society that aren’t capable of getting the point.

But Nazis aside, this is a phenomenal show, a relentless display of controlled aggression. When two drummer girls join Laibach on stage for the second half of the set to work their way through a seemingly endless routine the militaristic feel is complete.

Just when allusions to military force are almost too much to bear, Laibach break out the cover versions. Whether it is Quo they are deconstructing, Queen (One Vision), or their fantastic rendering of The Rolling Stones‘ Sympathy For the Devil, Laibach’s approach to cover versions is heartwarming. Not ones to approximate the original, they strip them back and make them their own (this is after all the band that recorded the entire Let it Be – minus Let it Be, obviously).

What is never quite clear is whether these covers are supposed to be funny, because to be frank, they are absolutely hilarious. If there is a humourous edge to what Laibach are doing, then it is very well hidden behind the bluster emanating from the stage.

And then it’s over, the house lights come on and everyone makes for the tube. Marching almost in unison, and each and every one of them hearing the same thing in their heads.