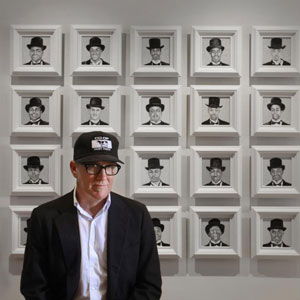 Ahead of the release of 11th album Mr M, Lambchop leader Kurt Wagner spoke of how it had arisen largely due to his belief that his band had “at least one good album left in them”, enough to tempt him away from painting (his recently preferred art form) and back to music. It was a revealing statement, almost an honest admission that their career as one of Americana’s most consistent and enduring torch-bearers may be entering its later stages.

Musically, Mr M follows closely in the footsteps of its predecessors Damaged and OH (Ohio) in being a perfectly formed, accomplished affair without ever quite reaching the heady peaks of their earlier output. Inspired by the death of Wagner’s close friend Vic Chesnutt, it’s a suitably restrained, personal set of songs and it is these that make up the majority of Lambchop’s set at the Barbican tonight.

American singer songwriter (and Wagner collaborator) Cortney Tidwell plays a 30 minute supporting set that acts as a musical precursor of Lambchop’s performance. The similarities in sound and pace are not altogether surprising given that 4/5 of Lambchop make up her (flawless) backing band tonight. Her set also implants the thought that tonight’s gig could turn out to be the tale of two voices. Tidwell’s offers evidence of fragility, fortitude and considerable beauty, on occasion even reminiscent of some of Tim Buckley‘s vocal inflections (albeit in a more svelte, feminine way). Later, she assumes a role providing discreet backing vocals during the Lambchop set.

Prior to the band assembling Kurt Wagner takes to the stage to deposit his bag, inspect the surroundings and do some last minute preparation. It’s indicative of the unassuming, down to earth approach that infiltrates much of his music. The songs from Mr M are performed in resolutely understated style, managing to sound both skeletal and crepuscular. When played live they seem to have even more of a zoomed-in quality, as if the music is being examined and appreciated through a magnifying lense that picks up every minute detail.

These are songs that find solace in quietude, without ever risking being sedate or unimpeding. Gone Tomorrow is brisk with a real lightness of tone, while conversely, Mr Met is arguably the most emotionally heavy song of the set. Betty’s Overture, a self-sufficient piano led instrumental sits alongside The Good Life, one of their most overtly countrified offerings of recent times. Throughout, Wagner’s vocals are enunciated in inimitable style, at times treacle-coated, at others resembling more of a low-lying tremble.

It’s unapologetically serious music but towards the end it is broken up by moments of light-hearted humour. Pianist Tony Crow jokes about how they’re back in London “as it’s another US election year”, referring to their last show at Union Chapel in 2008 that took place on the night that Barack Obama was being ushered into the White House. He offers a few more lines on London also being “the city of romantic intrigue” to which Wagner adds “and finance” to an outbreak of laughter. The band’s pedal steel guitarist also treats the crowd to the opening lines of Panic by The Smiths (in a comic, faux-Morrissey voice).

They return to familiar territory at the end, delving into their back catalogue for the closing tracks. Cowboy On The Moon is dedicated to Davy Jones, My Blue Wave sounds particularly surreptitious and The Man Who Loved Beer is still something of a fan favourite. They close with Bob Dylan‘s I Threw It All Away. The hope persists that this isn’t their swansong but if so, tonight’s sold-out show at the Barbican gave a timely affirmation of their brilliantly concentrated, distilled music.