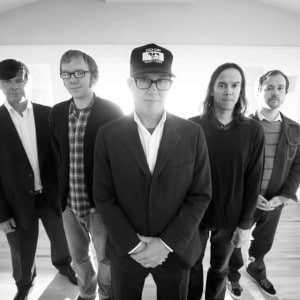 “Gimme an N! Gimme an I! Gimme an X! Gimme an O! Gimme an N!”. Lambchop frontman Kurt Wagner’s cheerleading engagement of the audience begins tonight’s special show at the Barbican commemorating the 15th anniversary of Nixon, the album that elevated them to a new level of fandom and acclaim.

It’s easy to look back on albums released during 2000 as representing some of the recent high points of alt.country/alternative guitar music; Heartbreaker by Ryan Adams, Hot Rail by Calexico, The Sophtware Slump by Grandaddy and And Then Nothing Turned Itself Inside Out by Yo La Tengo. It’s Nixon however that arguably has taken on the most significance since, transcending the genres it is assigned to.

First up however is Hebronix (the current project of former Yuck man Daniel Blumberg). Joined on stage by an ensemble comprising cello, violin, double bass and saxophone Blumberg plays an unpredictable and challenging suite that mixes loose song structures with extended atonal digressions. Audience members exchange confused glances, some leave the hall. Those who remain are rewarded with a brave and forward-looking set. It certainly contrasts with the polished continuity of Nixon that follows.

The Old Gold Shoe ushers in the album slowly, quietly and unobtrusively, in some ways seeming to strangely pre-date its own existence. Next, the light saxophone lead on Grumpus is the first sign that the sumptuous strings of the album will be (on the whole successfully) replaced by a variety of brass and woodwind instruments played by Matt Glassmeyer. The closely co-ordinated grouped backing vocal does its best to maintain the soulful sheen of the album but there’s early proof that minor reworkings will occur throughout. This also applies to Wagner’s vocals – they’ve changed over the intervening years, the falsetto now largely absent – tonight offering a delicately managed, tactile navigation of the lyrics.

In some ways the show sees the album repositioned to a contemporary Lambchop setting (yet it’s entirely reasonable and understandable that the live performance of the album exists in the context of the current line up’s focuses and strengths). You Masculine You sees flute and cornet assume more prominent roles and the striving and urgency of the record is replaced here with something more tapered, clipped and curtailed. Up With People is animated with handclaps but its slightly reduced form means its not quite as full-on euphoric as on record. Yet, there’s still a flawless musicianship on display and a studied focus on absorbing every detail fills the Barbican hall. Wagner explains later that they never really did big Nixon shows, preferring to concentrate on another album (its successor, Is A Woman).

The immaculate, pristine flow of the show continues – clarinet lending The Distance From Her To There a certain sadness whilst the fairytale-like The Book I Haven’t Read still contrasting with the darkness and suspense of The Petrified Florist. The Butcher Boy closes the first part of the show, the jolt of energy possessed by the album version being replaced appropriately by a gentler sound, Wagner alone on guitar for much of it.

The rest of the show cherrypicks highlights from the Lambchop back catalogue. Their jazz-tinted cover of Curtis Mayfield‘s Give Me Your Love opens the second set – taken from What Another Man Spills, still arguably the album that defines them best. My Face Your Ass, We Never Argue and Gone Tomorrow follow before they close with a feelgood cover of Young Americans by David Bowie (which shows the extent to which they can Lambchop-ify songs). The show is a masterclass in understatement and musical economy that confirms the high regard both band and album are still held in.