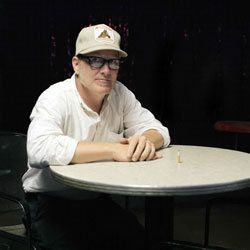 The Union Chapel is one of London’s most beautiful venues. The flickering candles, wooden pews, glowing stained glass windows and arched vaulting combine to provide a venue as thick with expectant atmosphere as it is with dreamy natural reverb. It’s a great setting for the borderline narcoleptic mellowness of Lambchop, tonight a seven-piece on guitars, percussions, piano, bass and keyboards.

They play their new record OH (Ohio) in full, clearly relishing the chance to give the new material a spin. It’s typical fare from a prolific band who never really change that much; and while this might sound like damning with faint praise, in this case the continuity is becoming. Lambchop don’t make bad albums, and their ever-attentive fans continue to lap up their output.

Tonight, Kurt Wagner’s paper-dry voice is softened by the sound of the room, to the point at which the echoing lyrics are hard to decipher. His voice is reduced to another instrument, a comforting drawl of echo that sits in the foreground of the sound. It’s a slight shame – Lambchop’s lyrics are great – but easily forgivable in the context of the evening. The still, echoey, pink-lit space of the Union Chapel provides a dreamy backdrop to Lambchop’s subtle, domestic style.

Wagner is ever the charismatic performer, rocking in his seat with his knees clenched together, arching his back and running his fingers over the strings with a flourish. For the rousing finale of the OH (Ohio) set, he ditches the guitar, pulling himself up with the mic stand and jabbing his finger towards the crowd, his deep, croaking old voice rising up the back of the top balcony. These few moments of movement are accentuated by the stillness of the performance; Lambchop can lift the roof off of any venue when they get into full swing.

They finish with a few fairly obscure older numbers – even though I own five albums I’m nowhere near familiar with everything they’ve done – and a rousing version of their signature song Up With People. Lambchop are as assured, consistent and accomplished as ever, and with performances like this coming as naturally as breathing, they ain’t going anywhere fast.