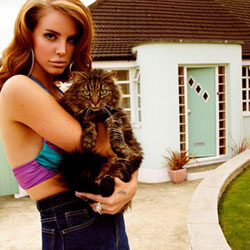 The Lana Del Rey hype machine has gone into overdrive in recent months. Having enjoyed a meteoric rise in popularity fuelled by a self-made video for breakthrough hit Video Games, the 25-year-old US singer has been rewarded with a Later… with Jools Holland appearance, a Top 10 hit for the track in question and a series of sell out UK tour dates. Not a bad turnaround for an unknown singer from Lake Placid whose first album, released under real name Lizzy Grant, appeared to little fanfare and disappeared without a trace.

Tonight’s gig itself has been subject to the Del Rey rollercoaster, having been initially pencilled in for Madam Jojo’s in Soho then moved to the larger capacity, yet still intimate, Scala. Tickets for her debut London appearance, which reportedly sold out within half an hour of being released, are being touted outside for as much as £120, but is the hype justified?

The short answer is yes. Opening with China Doll, the New Yorker’s beautifully haunting vocals are immediately apparent, coming across like a polished Kate Bush while demonstrating her strength at writing and delivering bittersweet tales of love. She then launches into upcoming single Born To Die, another tear-stained torch song that indicates with its refrain of “Let me fuck you hard in the pouring rain” that watering her style down to court further mass appeal may not be on the cards.

Dressed in a showbiz gold shirt and white jeans, Del Rey’s demeanour is one of contradictions, seeming vulnerable yet steely, humble yet starry, perhaps an indication that she is still adjusting to the attention she’s received of late. These contradictions are further symbolised by the fact that she seemingly has two singing voices; strong and soaring at one moment then breathy and fragile the next, as on Video Games AA side, Blue Jeans, which receives a rapturous welcome from the crowd.

This seems to be the stock response from the audience in fact. Hardly anyone moves throughout each song, not even nodding along to more upbeat numbers like The Radio, just staring in stunned, respectful silence then whooping and cheering after every song. Talk of whether Lana Del Rey’s new persona is simply a PR spin created by her management and the incessant, and at times spiteful, online debate about her enhanced lips fades into the background, overpowered by the songs and Del Rey’s voice.

Following piano-led ballad Million Dollar Man, Del Rey performs the track that induced the wave of intense interest that she is currently riding. Her rendition of Video Games more than lives up to the promise held within that simple song that has captivated so many, as the cine camera images that have become her trademark are flashed up on the giant white balloons that are dotted around the stage.

You Can Be The Boss then offers a contrast in tempo before Del Rey announces that the next track, the orchestral Off To The Races, will be her last. An apology to the crowd for the short set and a promise that she will return to the UK bring to an end an accomplished performance, though the audience – and even the sound man – seem confused as to whether the show is really over. As many people linger around it slowly becomes apparent that there will be no encore and that after eight songs in around 40 minutes, Lana Del Rey’s London debut has been and gone.

It may have irked those paying three figures, rather than the more reasonable £12.50 face value, for their tickets and the short set could have been a result of the fact that Del Rey quietly complained several times that she could not hear herself. More likely, however, is the fact that, having apparently been thrust to stardom overnight, the singer is still building up her armoury of songs.

On the strength of tonight’s often beguiling performance, it seems certain, above and beyond the hype and media feeding frenzy, that this is merely the beginning for Lana Del Rey’s career. And if the industry doesn’t box her up and break her individuality before the album comes out next year, it could well be a long and glittering one worth following.