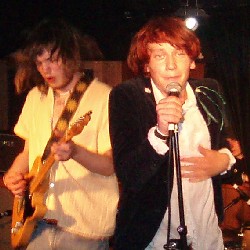 The Luminaire, situated in the grubby North London suburb of Kilburn, has over the last year or so developed a reputation as a place to see cutting edge bands before the hoi polloi, and the weekly music press for that matter, get their hands on them.

And tonight was no exception to this trend, as quite possibly the hottest band on the British Isles at present, Larrikin Love, were scheduled to appear, with tipped Dundee teenagers The View in support.

Now this is no small matter – y’see, give it six months and this will be the type of gig that people may claim they were at even if they weren’t, one that will be remembered by those who were lucky enough to be in attendance when they watch the very same bands in venues 17 times the size. For, without a shadow of a doubt, both these groups will be big, large, massive news, before the year is up.

The room was already uncomfortably packed when The View arrived on stage, heaving with anticipation and beer filled bodies. Some idiot was letting off a fog horn at regular intervals, too, as if to declare to the other unfortunate souls in the venue that he was more au fait with them than us. It was absolute bedlam, and something only accentuated when they started playing.

Rattling through a highly charged, energy filled set with a real snarl and intent, it was clear from the outset that this bunch are in fact the real deal. The comparisons to Buzzcocks and The Libertines are certainly there for all to see in their punky, mile-a-minute guitar riffs and effortless charisma, whilst the lead singer possesses a sweet, charming and outrageously melodic vocal that gives their choruses a real edge, none less so than on their superb forthcoming single Wasted Little DJs. The whole thing had the feeling of the beginnings of something very, very big indeed, and with this in mind, you’d be well advised to catch them as soon as you can.

So on to the band who everyone had come to see, the England berating, Twickenham based quartet Larrikin Love. And despite having something rather special to live up to, they didn’t disappoint in the slightest. Kicking off with their now trademark opener On Sussex Downs, y’know, the one that builds up in intensity and sees Edward Larrikin dancing around like a man possessed bashing his cowbell by the end, it was a suitably raucous start to a gig where us listeners were unable to relax for a second.

The hits came thick and fast after that – Downing Street Kindling got the crowd chanting in unison about burning fires in Westminster, the jerky rhythms of Six Queens and forthcoming single Happy As Annie induced some wild skanking, whilst a trombone aided, reggae tinged Meet Me By The Gateway was a moment of musical master class mid set. Guitarist Micko Larkin once again showed himself as an impressive fret boardist throughout, captivating the audience with some sterling, intricate work – particularly on the several solos of Edwould – that acted as the rock solid foundation for the performance.

What tonight’s show displayed, as ever, is that their forthcoming album The Freedom Spark will be one of the best of 2006, should they have been able to capture even half their onstage gusto onto record. It also re-confirmed, after a memorable headline slot at KCLSU the other week, that this band are without doubt, quite simply one of Britain’s greatest musical hopes.