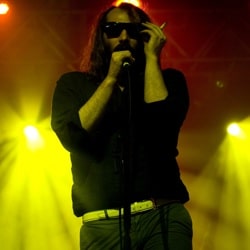 If you told us that Day 2 of Latitude 2008 would end with us watching a woman in nothing but pasties (andwe ain’t talking Ginsters here) spraying a bottle of champagne whilst dangling from a tree inharness attached to hooks embedded in her back, we’d have said, “Yeah. That seems quite probable.”

For Latitude, after just 24 hours, had demonstrated itself to be that kind of festival. Odd,exciting, and a little bit different.

And what better way to start your day than watching an avant-garde singer songwriter dressed as astar play next to a punting lake? Seriously, don’t all rush at once.

However, The Irrepressibles seemed to have covertly taken over Latitude this year – two liveperformances and an afternoon of ‘soundscapes’ in the forest. Lucky then that they’ve got thetalent to go with their camp artiness. Lead singer Jaime McDermott has the voice of an angel and hisbacking band, drilled to dance robotically in time with the music, gave the whole affair a wonderfulbaroque air.

White Lies kicked things off on the main stage, and despite the early afternoon, brightsunshine combination not really creating the right atmosphere for these serious looking black cladmen, their sleek, slightly operatic, poised on the brink of pretension, doom-pop-storm was prettyfantastic. And in Unfinished Business they have a song good enough to hang a career.

It isn’t on record what Sébastien Tellier would offer you to hang his career on. But the guess is itwouldn’t be printable on a family website (Know any of those? – ed).

Resplendent in shades, beard, ever-present cigarette and a selection of Gallic shrugs and disdainfullip curls so ridiculously, stereotypically French they could have been cribbed from ‘Allo,’Allo, he managed to not let the confines of a festival shape his set in anyway shape or form,managing just four songs before being forced off, including his Eurovision entry Divine.

It was, in some strange way, brilliant. Plus he managed the single best piece of crowd interactionof the weekend: “You’re lovely people… just so fat and ugly”.

No such insatiable rudeness from The Coral. Playing a remarkably electrified acoustic set they werereliably brilliant. You forget how perfectly formed Dreaming Of You is, how delightfully odd SimonDiamond is and how good a festival band they are. Plus the new material they showcased sounds pretty muchlike The Coral too. Which is great. La.

Now, forgive musicOMH for a second, but just what is the deal with dEUS? The Belgian rockersdrew a pretty impressive crowd to the main stage (possibly because of a lucky piece of scheduling -they clashed with the rammed Coral tent and little else) but their performance was little towrite home about – a confusing mix of jazz, prog and heavy metal.

Roadhouse blues? Sorry Jim, it’s all about Dog House blues. Seasick Steve: bona fide hobo,cowboy, sound engineer, producer, and as he would have it, “song and dance man” and “bum”. Theaffable bluesman was on supreme form for his early evening set on the Obelisk stage, playing up toand revelling in his redneck image, garnishing the giant crowd with a sweet set of blues.

Every song and instrument had its own story: the Three Stringed Trance Wonder (a “piece of shit”three string guitar with the remaining strings in the wrong place); the Diddley Bow (the onestringed guitar); the Mississippi Drum Machine (a small wooden box stamped on). He dedicated a songto his dead dog and hauled a female member of the audience to perform a song that he can only dowhen he “sings it to a lady”. One of the best things we saw all weekend.

To go from Seasick Steve to Sky Larkin was the equivalent of tapping your boots andsmoking in the sun with a cool beer to having a cold festival fried egg lobbed at your face. Thepromise displayed in their few releases was completely non existent here, and as the sun began itsslow descent, their thrashing and student-sized indie screeched and eeked out of the Lake Stage PAwith the enthusiasm of a college kid on a Monday morning.