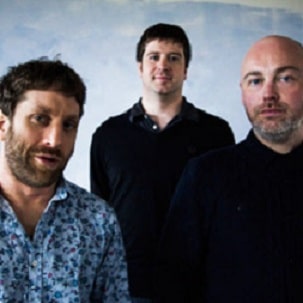 Most evenings, the Deaf Institute is full of 20-something art students, hipsters and indie music lovers. But not tonight: a pleasant if unusual mixture of the latter and discerning, older folk lovers, many of whom voice their delight at the venue – it’s their first time here. The audience, even the venue, show how Lau – and with it experimental folk – have crossed over into the mainstream.

The Music Hall is crammed; despite the autumn chill, the large fans attached to the walls are needed to keep everyone cool during acclaimed local openers Samson and Delilah. Reduced to a three-piece this evening instead of the usual five, flautist Anna Zweck says she’s enjoying this stripped back version, while guitarist Sam Lench tells us how they use melodies from popular culture in their songs, with particular reference to Ivor Cutler. Zweck voices her concern for playing the accordion in front of Lau accordionist Martin Green: “I’m self-taught!” she says. No one cares – their nu/psych-folk grabs the audience, with Lench pouring everything into his playing, his face impassioned, pained even. The crowd sense their determination and give an enthusiastic response. With a new album due shortly, expect big things.

“That’s the best mirror ball to room ratio I’ve ever seen!” enthuses Green as he arrives on stage. He has a point – the huge mirror ball glimmers, turning the plain ceiling into something resembling a planetarium or clear autumnal sky. Beginning with Arc Light’s up-tempo opener, The Burrian, the crowd roars with approval. Green, guitarist and singer Kris Drever, and fiddle player Aidan O’Rourke glance and interpret one another’s moves, with not a single note misplaced. The spontaneous changes of key produce joyful cries from the audience, with Drever responding with a fervent mid-song growl.

Moving into material from new album Race the Loser, Saint Monday sounds identical to the album version, with the laptop programmed bass vibrating both the floor and chest. O’Rourke then introduces Torsa, adding how he met a woman from the secluded island at a recent Glasgow gig. Apparently she had massive horns and blazing red hair. At this point, all three seem entirely at ease to the point you feel they could play anywhere, from the local pub to the largest of venues. They’re so bloody likeable, without an ounce of pretention. Played live, Torsa is reminiscent of British Sea Power‘s Man of Aran: the slow build-up to represent the island’s tranquillity, before the surges in tempo and volume project the island’s vibrancy and Celtic roots. Beautifully satisfying.

O’Rourke soon discusses the band’s orchestral work with composer Brian Irvine – “it made us feel like proper grown up musicians,” he says. A section from that work and album track Save the Bees takes on a wonderfully different complexion live, with O’Rourke’s aggressively repetitive, high-note reaching playing becoming almost Philip Glass-like, underscored by Green’s accordion, and forcing most to rock on their feet. It is a powerful, all-consuming performance. Yet it is set finale Midnight Feast from the Lau v Karine Polwart EP that stands out; the flashes of improvisation, samples from news reports and crashing waves and Green playing the accordion with a groaning intensity of a Koln Concert Keith Jarrett, produces something quite superb: a truly organic piece of sublime improvisation.

The three know they’re onto something as they smile and laugh with the crowd. Indeed, everyone knows they’re witnessing a rather special live band. A faultless, memorable performance.