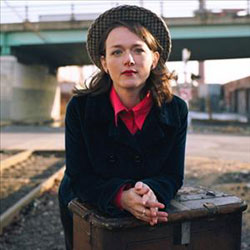 American songstress Laura Cantrell has been relatively quiet in recent years, her last major release being 2005’s Humming By The Flowered Vine, an album which witnessed a slight broadening of her musical palette and a fractional toning down of her country stylings. However, new album Kitty Wells Dresses sees her firmly return to country territory. The album is a tribute to country singer Kitty Wells, one of Cantrell’s musical heroines. Her show at Union Chapel was ostensibly in support of this album, although ultimately the gig contained a generous selection of material from all of her albums.

She is accompanied onstage by two musicians playing mandolin and guitar. They begin the show with her cover of Trains, Boats And Planes by Burt Bacharach, one of several covers that would feature in the set. The early part of the gig sees her concentrate on songs from her first two albums. The reflective Do You Ever Think Of Me showcases her mellifluent, crystalline vocals and a pared down, lovelorn When The Roses Bloom Again immediately follows.

Queen Of The Coast is preceded by a touching, funny anecdote about John Peel, his patronage still clearly a source of pride and support for her. Indeed, most tracks are afforded detailed introductions, the stories behind the lyrics being shared with the audience. This serves to further enrich the songs and instill even more in the way of authenticity into her music.

The trio of songs played from the new album, It Wasn’t God Who Made Honky Tonk Angels, I Don’t Claim To Be An Angel and the title track, provide some of the most overt country moments of the show and she also debuts three new, unreleased songs during the course of the evening, one being a result of her ongoing Radio Free Song Club project.

She returns to her back catalogue later in the set, most notably with Don’t Break The Heart, with its cautionary lyrics and sensitive musicianship. She also includes a cover of Letters by Lucinda Williams, full of rich storytelling detail. The sweetly melancholic Churches Off The Interstate and quietly defiant Not The Tremblin’ Kind close the main set.

For the encore she is unexpectedly joined by a visibly delighted Charlatans frontman and alt-country music fan Tim Burgess, who lends backing vocals to her cover of Love Vigilantes by New Order. The clear, pure vocals of Cantrell and low-slung Mancunian drawl of Burgess may seem an unlikely combination but it is so successful that Cantrell confesses she wishes they had closed the gig with it.

Instead, a plaintive rendering of The Whiskey Makes You Sweeter and a freewheeling Yonder Comes A Freight Train close the show in impressive style, which sees her consolidate her position as one of contemporary country music’s leading ladies.