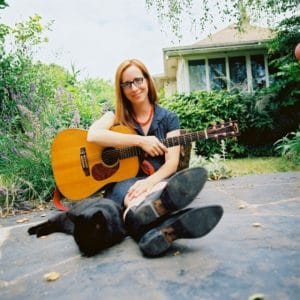 As the alternative acts of the ’90s nu-wave become baby boomers, it’s unsurprising that some of them are combining the day job with their nappy-based homelife. Although a Stephen Malkmus-fronted record of Sesame Street showtunes is still a distant dream for this writer, fellow Portland resident Laura Veirs‘ latest record Tumble Bee is a lovingly recorded clutch of traditional folk tunes for children, influenced by the birth of her own daughter – one which manages the neat trick of being as enjoyable for adults as it is for toddlers.

There’s always been a little of the comfortably middle-class hipster about Veirs’ work (a sample headline from her hometown – ‘Freak Tofu Explosion Terrorises Portland’ – perhaps tells you as much as you need to know about the scene she belongs to as necessary), and her playing separate kids shows, replete with a bubble machine, can only really add to that. But her work – 8 albums in total – is frequently transcendent, predominantly understated, wide-eyed folk with lyrics in thrall to the beauty of nature, peppered with the odd post-riot grrrl rock, a throwback to her brief brush with leading a punk band.

Tonight, understandably but perhaps a little unfortunately, the kids songs are kept to a minimum with a set drawn from across her back catalogue with an emphasis on 2009’s well-received July Flame. While gently moshing toddlers are a notable absence from the front rows, it’s the two kid’s songs that shine among the brightest of the evening.

The first, the clap-along Little Lap-Dog Lullaby, manages to make the dreaded concept of audience interaction seem… almost, well, fun, while The Fox – according to Veirs a little-known “traditional English song” – is a beautifully bloodthirsty reinvention of something Roald Dahl would have been proud to lend his name to. The fact that the songs aimed at a multi-generational audience slip into her set so easily is a good indication of the general across-the-board quality of the songwriting – cyclical, disarmingly simple with catchy melodies are notably hard to write, and Veirs has them in abundance.

Outside these it doesn’t feel that a Veirs concert would exactly be harmful to a little one, such is her gentle stage manner and series of subtle songs shot full with instantly hummable choruses. Flanked by electric guitarist Tim Young and multi-instrumentalist Alex Guy they struggle a little to make enough noise to fill the gigantic Queen Elizabeth Hall, so it’s a mark of the motional heft of the songs that they manage to create at least a semblance of intimacy around songs like the tender, fingerpicked When You Give Your Heart and the final, echoingly beautiful Make Something Good. The more upbeat songs fare better, the delicious Carol Kaye devoting its entire chorus to a series of Wrecking Crew-style harmonies and early track The Jailhouse is On Fire, a rollicking, unashamed country and western track which ends on a guitar solo that provokes as many grins of knowing recognition in the crowd as smatterings of applause.

Veirs’ between-song banter is as charmingly gawky as you’d expect from someone alternating adult shows with ones for 3 year olds, with deadpan tales of her hippie parents and discussing hilariously earnest ‘tour goals’ with her nonplussed bandmates. The ease which she skips from childish glee to moments of sweet, heartbreaking melancholy is quick and skilful – she’s added another string to her already formidable bow, and it will be fascinating where she goes next.