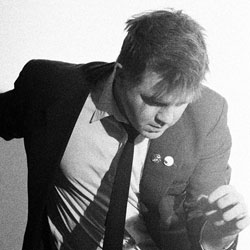 Ahead of new album releases, most bands tour to promote those releases. LCD Soundsystem, on this tour ahead of third (and mooted final) album This Is Happening, deign to drop a mere three new tracks into what is otherwise a set skewed into Best Of territory. There’s a valedictory feel beneath the mirrorball.

While fans of James Murphy’s sprawling disco funk were never going to complain about a set list that offered up rare B-sides alongside their best known songs, the lack of new material was as surprising as was the band’s decision to play Us v Them twice. First time round they weren’t quite ready. Perfectly formed synth mascot Nancy Whang’s keys made no noises and the Brixton Academy’s soupy sound failed to reveal who else was playing what in any case.

But thoughts of Murphy losing his edge were set to one side, given the chance to dance twice to the Sound Of Silver bootyshaker, and our talkative host’s interminable ramblings between songs strongly hinted at a further tour in support of the album later this year. The DFA founder has always been the best judge of what he’s doing; had he played a set of new and relatively unknown material – despite the album leaking and subsequently streaming – would the party have fired up in quite the manner it did?

Thus it was that the band looked curiously backwards and a little over their collective shoulder instead of boldly into the future, eschewing the chance to debut big hitters Hit or One Touch from the new record. Lead single Drunk Girls was unleashed in frenetic fashion, along with the Losing My Edge-alike Pow Pow and the touching I Can Change. Perhaps Murphy’s yet to memorize the lines to the rest of the new album’s songs. Or maybe he’s decided two tours are better than one, just as he opts for six-minute songs over anything that would fit a radio schedule.

But LCD are about the imperfections and idiosyncracies that make them – and their addictive take on dance music – human. It’s why they play everything live rather than programming it all. The tightly drilled band propel the evening on, but Murphy’s poignant lyrics on Someone Great and New York I Love You But You’re Bringing Me Down underline, just as they did when they were played in this venue three years ago, why this band’s lyricist matters as much as his bandmates’ compelling ability to get a crowd going.

Murphy is one of the world’s least likely front men, yet there he stands, raving away into a microphone, his lyrics swamped in the din, while in front of him every member of the audience is hollering every word of All My Friends back at him, for him, with him. It remains one of the best songs ever written, and everyone in the room knows it. Tonight LCD and their unforgettable back catalogue are a unifying force for good. There’ll be another tour for the new stuff.

LCD Soundsystem played: Us v Them (twice), Yr City’s A Sucker, Pow Pow, Losing My Edge, Drunk Girls, All My Friends, I Can Change, Tribulations, Movement, Yeah; Encore: Someone Great, Daft Punk Is Playing At My House, New York I Love You But You’re Bringing Me Down.