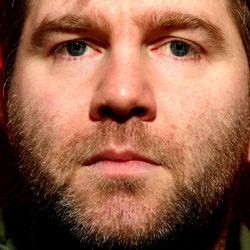 This first night of a UK tour brought two of the finest synth-dominated bands of recent times together for a mouth-watering meeting that delivered just as much as it promised. Even the hard-to-get-to Alexandra Palace, with its cold, soulless hangar space and its hideous tokens-for-beers system, wasn’t able to defeat the acts it played host to.

Billed as a co-headline tour, LCD Soundsystem‘s heavyweight power bettered the enjoyable but ultimately insubstantial Hot Chip. Having said that, both were in fine form tonight with Hot Chip as sharp and tight as they’ve ever been live. With a back catalogue characterised by classic singles, they’ve struggled to find the depth to propel them to greater things. Happily for everyone, those singles got outings tonight as the set began with Boy From School, also taking in the defining Over And Over, as well as recent releases One Life Stand and I Feel Better before, naturally, ending with Ready For The Floor.

Both bands have toured their current albums extensively and so it shouldn’t have come as too much of a surprise to find them both at the top of their game. Particular credit during Hot Chip’s set has to go to the besuited Owen Clarke whose comedic interactions with Al Doyle had him looking like he was having the time of his life, a quality infectious for their audience.

LCD Soundsystem’s career has conversely been characterised by brilliant albums, interspersed with the occasional misjudged track. One of the benefits of their live show is the trimming down of those lesser works, leaving a setlist comprised only of excellence. Lead singer James Murphy recently told us that having concentrated on older songs for their tour earlier in the year, he intimated that he was hoping to work out how to incorporate more tracks from latest album This Is Happening into the live set.

It was clear from the outset that they’d done just that with the triumvirate of Dance Yrself Clean, Drunk Girls and I Can Change. Bringing these songs to life added a huge dimension and gave them the opportunity to showcase the newer sounds. The ’80s stylings on I Can Change found Murphy spotlit centre-stage, a realisation of the open honesty of the lyrics.

Eyes closed, hands inverted and microphone clutched to his mouth, Murphy seemed relaxed, his voice warm and on-key despite the steroids he’s been taking to combat the loss of his voice.

LCD Soundsystem have averted genre categorisation, successfully taking on a diverse range of styles to give each song its own identity. They’re carefully constructed, whether it’s the military regularity of the rhythm section that begins You Wanted A Hit giving way to an eventually dominant bass, or Tribulations building until it spirals out of control. The common element is the infusion of energy, perfect for the live environment.

One can’t help but be a bit let down by venue issues and time constraints which may or may not have resulted in a shortened set (11 tracks felt like being a little short-changed). But while the gig as a whole isn’t quite perfect, the performance most certainly is.