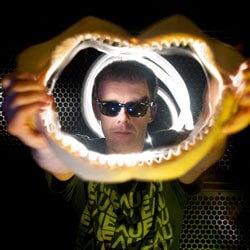 It’s the bass you notice first. Pounding around the cavernous Brixton Academy, ricocheting off the walls, subwoofers primed, shaking the floor. Five thousand fans, all slightly longer in the tooth than they’d care to admit, are pulverised by a single, joyous bassline that hasn’t been heard in a venue this size since the early part of this century.

Leftfield, among the godfathers of modern dance, have leapt upon the reunion – or at least, in their case, reanimation – bandwagon at just about the right time. With ’90s groups like Orbital and Blur making successful comebacks, and thematic successors like Magnetic Man scoring chart hits, it’s never been more attractive to tap into the rich vein of nostalgia that runs in the blood of the now gainfully employed dance-boom survivors.

Yet it’d be a mistake to see Leftfield’s comeback as simply a cynical cash-in. For a start, only Neil Barnes has returned, with founder member Paul Daley preferring to stay at home putting the finishing touches to a solo record. While this inevitably raises the spectre of, say, the Paul Weller-less The Jam comeback of a few years ago, the decision appears to be amicable. And, as much as there’s an inevitable cash incentive, the pure joy of revisiting two landmark records in front of an audience who’ve been gasping for a reunion since 1998’s Rhythm And Stealth seems, as the augmented group bound about the stage, almost too good to pass up.

And so, back to that bassline. In 1996 Leftfield were infamously banned from playing at the Brixton Academy again after their sound system was so loud it caused plaster to fall from the roof. They were allowed back in 2000 with less destructive results, but the rumours at this, their second night at the venue, are that they repeated the trick the night before. It’s a well worn journalistic cliche to describe a gig that shakes a venue “to its very foundations”, but there’s not that many times you can attend one that actually does. From the moment Song Of Life really begins to wig out, all the way through to the end of an extended, aural canal-battering Phat Planet, Leftfield’s show is ultimately a meaty, powerful display by a group continuing to fire on all cylinders.

With a set almost entirely comprised of songs from their epochal debut record Leftism (poor Rhythm And Stealth, a good album by anyone else’s standards, gets only a handful of tracks), this is as laser-guided as audience-pleasing sets get. By the time Original begins with that languid, loping skank, every single person in the venue is gamely doing the kind of dance moves they’ve not attempted since an illegal rave in Kent field in 1996. The music has aged remarkably well – Leftfield’s schtick was, particularly on Leftism, a fusing of underground rave culture and a dollop of shaman-like mysticism, and even these moments feel totally in keeping with the slightly loved-up vibe around the venue.

The group have, kindly it must be said, done much to jazz up the scale of the show. As The Chemical Brothers, who took Leftfield’s penchant for VJing and ran with it can tell you, a few black-clad chaps shuffling about the stage pushing indeterminate buttons does not a visual spectecle make. Here, each song is accompanied by a dizzying (and, perhaps, sometimes a little old-fashioned) blast of light and video on a giant screen behind them. When it works, like when a giant, pixellated Afrika Bambaataa bellows out Afrika Shox, it’s funny, inventive and exciting. When it doesn’t, you’d really rather they’d just stuck a few more lasers up. Making something of a return are the original vocalists (except, rather ironically, Original’s Toni Halliday) Djum Djum and MC Cheshire Cat, who deliver the requisite fire to Afro Left and Inspection in quick succession.

It’s difficult to criticise Leftfield’s triumphant return to Brixton – the songs they play have been stamped into the conciousness of an entire generation of music lovers, so even hokey reworkings of them would be greeted with a sea of people energetically bigfishlittlefishcardboardboxing back at them. That every one is lovingly revisited, particularly in the venue that’s become part of their mythology, makes it feel like a very special homecoming. They’ve been away too long.