by Philip Matusavage
published: 10 May 2013 in Live Music Reviews
Tweet 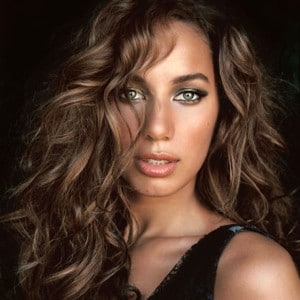 As she reminds us during this evening’s concert, it’s been seven years since Leona Lewis won The X-Factor and released a cover of Kelly Clarkson’s A Moment Like This as her debut single. The fact that she can still play two nights at the Royal Albert Hall all these years later is something to be justifiably proud of, given the short shelf-lives of most reality show progeny. Still, if Lewis’ longevity is impressive it’s unavoidable that she faces an uncertain future. Her last album Glassheart disappeared swiftly from the charts while her last single didn’t trouble the Top 200 in the UK. The temptation for someone of her ilk must be to release some anodyne covers album aimed at a Mother’s Day market (hello, Joe McElderry). So it’s heartening that this evening balances the big balladry that made her name with some far more adventurous material which she evidently has enormous fun performing.

Much of Lewis’ success of course stems from that voice – a gift so formidable that her victory in The X-Factor was always assured – but it’s easily forgotten that she was a singer-songwriter before she ever met Simon Cowell. This artistic impulse is evident in the show’s opener, the brooding dub-step of Come Alive. Performed largely from behind enormous sheer curtains, it clearly baffles those who are present to hear the Leona they fell in love with every Saturday night all those years ago. They are sated by an early rendition of A Moment Like This, though this sits uneasily alongside the unloved Avicii song Collide.

It highlights what seems to be Lewis’ biggest problem at the moment. Glassheart is both her most diverse and strongest album to date, yet its eclectic styles and lack of key-changing power ballads meant that it lost much of her former audience. Clearly Lewis has both the desire and capability to artistically spread her wings but whether she’ll be allowed to do so is another matter. Tonight’s set, however, largely pulls off this uneasy balancing act. Note-perfect and affecting renditions of Footprints In The Sand and The First Time Ever I Saw Your Face captivate the audience and allow riskier choices like a reggae-fied Better In Time (mixed with Rihanna’s Man Down) and the pounding album obscurity Sugar.

Lewis’ performance skills have developed enormously over the years – she may once have been a figure of fun for her inability to move on stage but tonight she is boisterous and commanding. Nowhere is this clearer than on a storming rendition of Glassheart where Lewis plays a drum and dances with abandon. The song’s imposing electro is far removed from what she is known for but it works magnificently and captures the audience. You can’t help wondering what might have been had it been Glassheart’s lead single rather than the Emeli Sandé-penned Trouble, which Lewis performs on the piano. It’s a beguiling song, certainly, but lacks the niche-carving identity that she so desperately needs right now.

Lewis is, of course, in fine voice and her awe-inspiring notes on Happy bring wild applause. It’s notable however that there is a heavy reliance on the talented backing singers. They transform Forgive Me with their tight harmonies but at times it feels like Lewis is happy to let them carry the choruses more than is necessary. This is a small complaint, however, in a show which highlights that Lewis is a pop star who can more than hold her own against the big American superstars. Indeed, her rendition of the classic Bleeding Love is world-class while the climactic Run (delivered with the Hackney Empire Community Choir) is simply stunning.

Whatever commercial pressures she might face, Lewis deserves far more than the churned out covers albums that have claimed many of her contemporaries. On the strength of tonight, she is clearly capable of being a daring, world-conquering pop star and hopefully she can find a way to move forward without sacrificing her new-found confidence and identity.