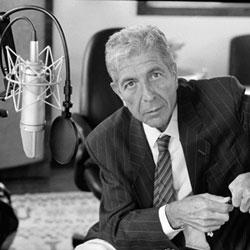 When one thinks of poetic places in which to officially unhang your hat after a 14-year absence from the London stage, the corporate sinkhole of the O2 doesn’t spring immediately to mind.

Humorists would have loved the irony of the performer’s name in lights being periodically erased and replaced by prosaic ads for BMW and Nestl, but the stream of expectant adults thronging from the tube seemed merely bewildered.

But if the O2 is a monstrous underworld where respectable citizens are scanned, prodded and herded by unsympathetic jobsworths, then Leonard Cohen is every bit as persuasive and transcendent as the Orpheus of myth. In the time it took to quip about the venue being “just the other side of intimacy” and apologise for putting his audience to “geographical and financial inconvenience”, the dapper 73-year-old has the capacity crowd eating right out of his hands.

Wearing his trademark fedora and a double-breasted pinstripe suit, he was uniformly grey in appearance, but anyone still stuck with the image of Cohen as the man who puts the dour into troubadour should really think again. Hammy in the best possible way, he’s an improbable mix of self-awareness and humility. Explaining where he’s been all these years he wryly tells us he’s been studying the philosophy of religions. “But cheerfulness kept breaking through,” he jokes, flashing an impish, mile-wide grin. After each song, the fedora is brought to his chest in a warming gesture of heartfelt thanks.

If Cohen’s between-song banter is polished, his body language while singing is comparatively insular. He often sings with both hands up to his face, which he wears thoughtfully composed during instrumental solos. At one point, during Who By Fire, this leads to a (presumably) unintentionally comical instance when, following the lyric “who shall I say is calling?”, he momentarily adopts an expression of genuine confusion. Occasionally he drops to a bended knee when interacting with guitarist Javier Mas (“the shepherd of strings”), but otherwise he bashfully grandstands in the centre of the stage.

And Mas is not the only one to get such a handsome introduction. Cohen takes the time to work up individual applause for every one of his nine-strong band, including his trio of “angels” Sharon Robinson and the Webb Sisters, Hattie and Charley, not once but at least a dozen times. Such a charitable display of camaraderie only reinforces the sense that this was a group effort. Indeed, it is only after the intermission that Cohen himself lays hands on an instrument, a keyboard to be precise, from which he delivers a brilliant Tower Of Song before channeling real intensity to see him through Suzanne.

After a brief lull during a perfunctory Gipsy Wife and a bland Boogie Street, Cohen steps up for a very physical, almost thunderous Hallelujah that divided no opinions. He practically steals the breath from the air. People weep. It’s absolutely magnificent. And he doesn’t stop there. A riotous Democracy gets exceptionally loud applause for the resounding gravity of its politics and I’m Your Man pleases no end, but the real showstopper is his recital of A Thousand Kisses Deep as a spoken-word masterclass in romance. A teasing pause over the line “I’m old but I’m still into that” gets the old joker’s eyes a-twinkling and a murmur of amusement ripples through the crowd. A duet with Hattie Webb on Take This Waltz smoulders with beauty, while old favourite So Long, Marianne ensures his first departure is met with a standing ovation.

Running on and off stage with child-like glee, Cohen’s many encores could not have been more perfectly or cleverly sequenced. First We Take Manhattan and Sisters Of Mercy are sublime, and when the apparent finality of Closing Time is disproved by the pointed inclusion of I Tried To Leave You, it’s hard not to lovingly marvel at the schmaltz of it all. The monochromatic Cheshire cat on stage thanks us for, well, everything, and leaves us with the humble reminder that he’s just “a man still working for your smile.”

You’ve got it, sincerely, L. Cohen.