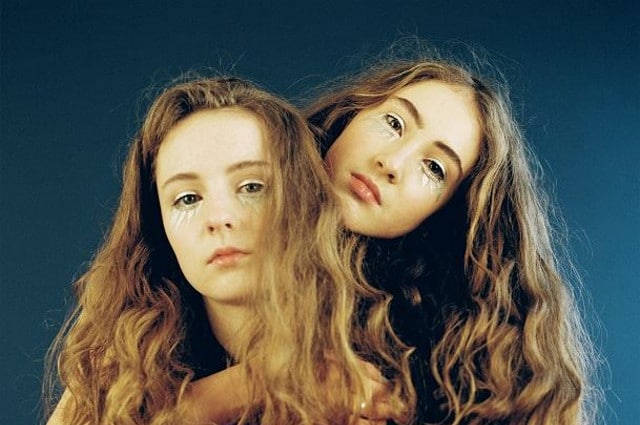 It seems a shame to be huddled into the looming, glass walled Oval Space tonight, when just a couple of days ago – Halloween – would’ve added multiple layers of atmosphere to the show. Because Let’s Eat Grandma are spooky. Eerie. Creepy.

From the second they enter the stage, playing a deadpan game of pat-a-cake, to the moments spent playing a recorder duet, their long, Rapunzel-length hair draped over their faces, they’re utterly haunting. And of course it’s no accident; the Norwich teenagers have choreographed their performance to squeeze every note out of their debut album, the Transgressive-released I, Gemini; it’s theatrical and at times almost comical, all eyeballing and lolling heads. A creepy infantilism, digging into that universal terror of spooky little girls, the album’s title itself referencing the idea of twinned souls.

Indeed, the duo are almost indistinguishable from one another, switching between instruments, even replacing the other’s finger to hold down a key when taking over keyboard duties. They’ve a host of kit to flit between; guitars, synths, drums, glockenspiel…but there’s one instrument that embodies this band. They’ve spoken a lot about wanting to rejuvenate the recorder’s fortunes, and they play it with an avid sincerity, sometimes as a stabbing bark, sometimes with grace, a fluttering overture, but always as a means to add to their freaky, childish skit.

On paper, they’d be easy to laugh off as something of a gimmick, but tonight shows how well conceived their first record – much of it written when they were just 15 – is. While they – Jenny Hollingworth and Rosa Walton – flow in near perfect synchronisation, their music sits in thorny contempt; squawking recorder against elegant keys, relentless drum machine over fizzing electronics; at parts it feels uncomfortable, like nails dragged down a blackboard, but just when it feels almost irretrievable, they pull it back down to earth.

Take their showstopper, Rapunzel; a nightmarish fairy tale that opens with the line: “My cat is dead, my father hit me, I ran away, I’m really hungry…” Its brazenness provokes giggles in the crowd; it’s really silly…but then it melts into something rather more elegant. Like school kids messing about before giving a cheeky glimpse of what they’re capable of. If they wanted to.

This playfulness continues with the desolate glockenspiel build up that thrusts Eat Shitake Mushroom into its infectious chorus and unexpected, childish rap. Their debut single, Deep Six Textbook offers something a bit different; a sprawling, downbeat mission statement that’s their equivalent of a guitar solo – a lazy, dragged out drone.

They don’t say a word or even acknowledge the audience throughout the show, so as not to break the spell…a gesture hampered by a “technical hitch” during their first 30 seconds on stage, causing them to restart. They give a chirpy apology. And for the rest of the show, they remain firmly in character. Performance art, theatre, wonderfully eccentric music…Let’s Eat Grandma whisked us into their world for 45 minutes, before thrusting us back on to the streets of east London, which feel a little bit creepier now.