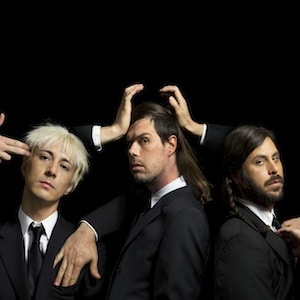 “I’m having a lovely time” piped probably the most endearing hipster in Old Street from across the smoky, dark XOYO venue, minutes before Liars take to the stage. Although said hipster had definitely got the right idea, ‘lovely’ is probably an unusual term to describe a Liars set. Tense, ferocious and unhinged are probably closer to the mark; both the band’s old and new material was showcased here and the results were spellbinding; the (relatively) subdued, slow-burning WIXIW material giving way to the intense bursts of fury to which earlier records such as They Were Wrong, So We Drowned bore witness. Agnus Andrew prowled the stage with a witty, ironic confidence and animation, both entertaining and frightening the crowd throughout with hand gestures and stabbing motions; reminding them what a formidable front man and enduringly challenging, excellent band they were witnessing.

In keeping with the latest record, the set opened with the mysterious drone of The Exact Colour of Doubt, creating a gloomy sense of foreboding for a gig that didn’t disappoint fans of Liars’ old or new. Standing on the dark stage, leaning forward and with his long hair across his face, Andrew was a figure of shamanistic macabre; the audience waiting for the band to furiously combust as they built tension and atmosphere with masterful technique. This tension would reach a height with tracks such as the insistent, tribal Let’s Not Wrestle Mt. Heart Attack and Scarecrows On A Killer Slant, subjecting the audience to a relentless assault of gothic noise and thumping bass. This building of tension and subsequent incendiary burst would continue throughout the gig, with many earlier numbers interspersing the newer, more introspective ones, culminating with the ferocious, dread-laden Broken Witch and Plaster Casts Of Everything.

As the band themselves have testified, especially with regards to the difficulty encountered in the transition, the latest record is a marked change in instrumentation if nothing else; the guitars generally sidelined for synths and drum machines. As such, one may have expected a slightly less cohesive affair in terms of performance; this was not the case. The gig flowed seamlessly and the band showed themselves to be an outfit on top of their game, instigating different instruments to accommodate for the old and new material, tracks which complimented each other excellently despite their musical diversity. The atmosphere throughout was one of intensity and mystery and the crowd were enraptured by the performance; in parts pogoing furiously or else stood stock still in quiet awe at Andrew’s dramatic, Nick Cave-esque persona.

If the gig began with the comment “I’m having a lovely time”, then it is befitting that it ended with an audience request to “play something horrible!”, both adjectives are appropriate for this remarkable gig; in equal parts terrorizing, relentless, beautiful and majestic, Liars shook XOYO to its very foundations and continue to prove themselves to be one of the most impressive and innovative bands out there. The New York ‘dance punk’ scene of the early 2000’s in which they were so lazily and inappropriately grouped maybe a long past fad, but Liars’ continual shape shifting and experimentation progresses with every album; leaving many of their contemporaries of a decade ago jostling with The Vines for airplay at an indie disco. Long may they persist.