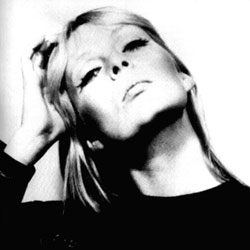 But even if we assume that opening tonight’s tribute to Nico with Frozen Warnings (from her 1969 album The Marble Index) is a subtle in-joke, is it too much to expect even a cursory “Hello”?

Without anything resembling an MC, with no introductions and no indication in the programme or anywhere else of who tonight’s interpreters of Nico’s finest moments are, the atmosphere falls somewhat flat, to such an extent that when the interval comes, no-one is entirely sure whether we are, in fact, expected back after a glass of wine on the balcony or not.

When the second half performers are greeted with terrace chants of “Who Are You?” they interpret it as friendly banter. It is, to some extent, but it is also a genuine desire for someone to tell us. Please.

This all comes close to ruining what could have been a near-perfect evening. After all, the singers Cale has chosen to reinterpret the songs of Nico are well picked. The one-time Velvet Underground chanteuse, whose professional relationship with Cale long outlasted either of them’s involvement with Andy Warhol’s original art rock collective, was never the greatest vocalist, but her songs were haunting and engaging nonetheless. The truth is, most of tonight’s performers do a better job of them than she ever did. Of course the audience wants to know who they are.

But, onto the show. It starts with Frozen Warnings by a string quartet and John Cale, gradually building up its layers to include rock instruments as well, as Bauhaus’s Pete Murphy throws white petals over the participants before taking over vocal duties himself for Mutterlein. His Gothic tones suit the material well, as does the piano style of his successors, the Guillemots. Fyfe Dangerfield suddenly seems to owe more to Cale than you’ve ever noticed before as he manically attacks the ivories for My Heart Is Empty.

Dangerfield is one of the best interpreters of the evening – a position shared with a woman in a long silver dress (Lisa Gerrard of Dead Can Dance? There is some disagreement about this in journos row) and Mark Lanegan, whose gravel-tinged vocals suit the material perfectly. His renditions of Roses In The Snow, from The Marble Index, and Win A Few, from1985’s Camera Obscura, are by far the highlights of the night though Dangerfield’s minimal interpretation of My Only Child, from 1970’s Desertshore, gives Lanegan a run for his money.

James Dean Bradfield is the only performer who brings more of himself to Nico than he takes from her, making Janitor Of Lunacy (also from Desertshore) sound inimitably like a Manic Street Preachers cover and yet neither this, nor his spoken word passage in the ensemble cast’s closing rendition of All That Is My Own, detract from the experience. As he takes the time to shake hands with Cale after performing, we cannot help but wish tonight’s curator felt like doing the same for us.

And so the evening draws to a close with a sense of frustration. The music has been wonderful, the atmosphere less so, punctuated by too many long silences while instruments are set up and taken down that could have been filled by anecdotes about Nico’s life and career, what it was like to work with her and what sort of person she was. But the chance has gone, and all we are left with are the memories. Aloof, ice maidenish and untouchable, perhaps that’s the way she would have liked it after all.

Life Along The Borderline MP3s or CDs

Life Along The Borderline on Spotify