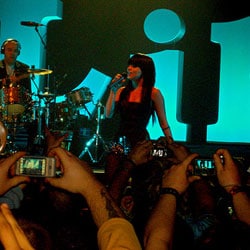 Lily Allen’s first London gig in two years was ostensibly a showcase of new album It’s Not Me, It’s You. But it also served as a chance to remind people why she’s a star.

Allen’s face has rarely been out of the papers since her 2006 debut, as her rise as a genuine A-lister has been chronicled, copied and gossiped over.

But here she was before innumberable cameraphones, not going to a bar or hosting a chat show, but singing. Even before she appeared, this felt like an event.

Under glossy locks and wearing a slinky black top, she appeared before a backdrop of her name that changed colour throughout. Teasing the photographers with suggestions about her top falling down, soon she was relaxed enough to kick off her shoes and sashay across her stage.

Her tightly-drilled band struck up album opener Everyone’s At It, a frank discussion about drugs and attitudes towards them, but she wasn’t going to play the new record sequentially; next up came LDN, to cheers from the crowd.

An initially rather soupy, bass-laden sound mix improved as the gig progressed to I Could Say, a song not yet officially released that everyone already appeared to know the words to. With an off-kilter beat and emotive piano chords it’s a surefire hit in the making.

She introduced Not Fair as “stupid country” but it proved to be one of the set’s most compelling moments, lyrically as memorable as its musical arrangement. Fuck You followed and was dedicated to George W Bush with a wave of her middle fingers. The 43rd president may have left office, but his influence on culture looks like living on awhile yet.

Announcing that she can’t do gigs without alcohol, she sipped from a pint of beer ahead of introducing I Don’t Mind as a song “I jacked off Take That… unintentionally rewrote it.” There’s no snobbery about musical influences; Lily’s as happy rubbing up against ageing boybands as she is with Mark Ronson. Pop is simply at the core of her being.

Also new was 22, a lyrical highlight of the set that deals with an ageing party queen struggling to keep it all together; Him, her song musing on God; and Never Gonna Happen, a playful ditty “about an ex I don’t really like anymore,” she tells us. Woe betide exes of Lily…

Next she was apologising for her old songs’ absence. “I think they’re really juvenile,” she confided, before launching into the frenetically paced Back To The Start. Contrasting this with her old material is like an exercise in comparing night with day but, juvenile or not, she found space for Littlest Things (which she dedicated to Ronson) and Smile, which began to cheers from the audience. Her lilting, playful vocal delivery proved as charming now as three years ago when we first heard them.

Finishing the set was her new single The Fear, already a dead cert to top the charts this week, and already well enough known for the audience to help her quiet vocals by singing along. It’s an undoubted highlight of the new record, and it proved a highlight live too.

What would she do for her encore, having already wheeled out The Fear, Smile and LDN? The answer transpired to be a staggeringly good version of Britney Spears‘ Womanizer, a confident performance that again served to underline her pop grounding.

So ended a set of just over an hour, with no filler, and no messing about. Like when she first appeared, Lily keeps it short, tight and sweet. It’s a winning combination that looks likely to serve her well for a while yet.