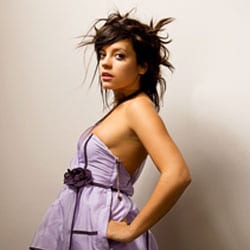 Chances are whoever booked Lily Allen for an outdoor show in the courtyard of the lovely Somerset House (for the second time in three years) wasn’t banking on the constant stream of drizzle that does its best to dampen spirits.

Part of the successful Summer Series, it’s more than a bit depressing to see small groups of children swathed in those all-in-one plastic rain coats, or the giant golf umbrellas that conspire to block views.

But to be fair, the rain doesn’t seem to bother Lily Allen too much. By the end of the gig she’s skipping around the stage having shed her sparkly cardigan, jacket and shoes, wearing something that looks remarkably like negligee on her top half and some leggings on the bottom.

But we’re getting ahead of ourselves. Rewind 90 minutes and a fairly make-shift looking white sheet is pulled tight across the stage, various roadies tugging hard on both sides. Suddenly, the juddering synth riff from It’s Not Me, It’s You opener Everyone’s At It roars into life and a giant Lily Allen silhouette appears, looking imposing on an elevated stage. Just before the first verse the sheet drops and the pint-sized actual Allen races down the steps to the front of the stage looking demure in black with sparkly silver eye make-up.

It’s interesting to witness how mature and self-assured a performer she is now. Gone are the flowery ball-gowns and trainers, the verbal diarrhoea has, for the main part, been curtailed in favour of genuine thanks (she says “I love you guys” more than once) and the swearing is channelled towards a worthy cause, the BNP. At the same time, she’s not lost any of the endearing qualities that have seen her score a Number 1 album, a couple of Number 1 singles and become as close to a national treasure as a 23-year-old can be. She also has enough material to only play half of hits such as LDN and Oh My God, the former segueing into a thrilling, pounding Back To The Start.

In total, 10 songs from It’s Not Me… are given an airing, including a stripped back He Wasn’t There (“about my Dad… who isn’t here tonight either”) and the vulnerable Who’d Have Known. Whilst the toe-curling Him still sounds as trite live as it does on record, the other newer songs sound fresh and energised, especially The Fear and new single, 22. Of the older material, The Littlest Things becomes a sweet sing along, whilst Smile’s effervescent chorus is roared back by a crowd who’ve given up on umbrellas and decided to splash about instead.

During the slower numbers Allen puffs away on a fag, apologising for smoking so much and claiming it’s to ward off the cold. Given the fact she’s stood there in little more then her underwear raises a few giggles as does the moment she perches on the edge of the stage only to realise she’s stuck and has to wait for a burly roadie to lift her up. She’s an endearing, sweet character who seems to genuinely enjoy what she does now, her enthusiasm becoming more infectious as the night goes on. A rocked-up version of Britney Spears‘s Womanizer sees her leaping about with more energy then Spears seems able to muster these days, whilst the blunt Fuck You finds Allen leading the crowd in a one-finger salute.

It ends with recent single and sexual performance critique Not Fair, Allen suggesting that the men in the crowd leave early. As with The Fear, the song is played straight before morphing into an extended, electro re-working that keeps the crowd dancing and, more importantly you feel, Allen from getting bored. As the song judders to a halt Allen says her goodbyes and sprints off leaving a sodden but happy crowd singing the lyric about blow jobs over and over. Who said she’d matured?