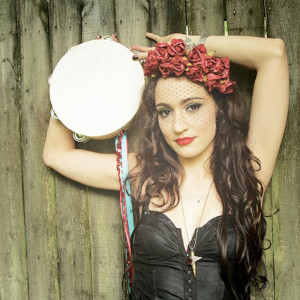 “Who said people in England don’t like country music?” asks Lindi Ortega, winking at her audience. By referring to herself as a country singer, Ortega is doing herself a disservice; there’s much more to this Toronto-born lady than lonely hearts and dosey does.

The stage is set by support act Tom Hickox, whose debut album is due for release in six weeks. Again, the tag of singer/songwriter lets him down; he’s got an exceptional voice that works its way around the engrossing stories that make up his songs. One in particular, The Lisbon Maru – a tale of a pub regular whose incredible stories of his youth turn out to true – has the early assembled crowd not only watching, but listening intently to what happens next. Likewise, Good Night is a beautiful weepy track that is made all the more special by a spine-tingling vocal that tips its hat towards Neil Hannon and Richard Hawley. They might have little in common musically, but Hickox readies the Garage to be impressed.

Her guitarist is the first on stage, strumming out the slow intro to Hard As This, the opener from Ortega’s most recent album, Tin Star. “Love shouldn’t be so hard,” she pleads, doing what she does best; pouring her heart out. She’s fantastically confessional; whether she’s talking about boys in bands who dumped her, recalling her time slogging it out in bars and clubs or singing her own take on one of her favourite songs, she has an air of naughtiness about her, like she’s shared too much and that life’s going to catch up on her.

She’s joined by The Webb Sisters – a sibling duo she claims to have joined as “their creepy adopted sister” – for Lived And Died Alone, “a song for people who like necrophilia,” she quips. In reality its tragic lyrics talk about her fear of never falling in love and, erm, digging up dead people to put in her bed. She’s melancholic to the core, but a lively, witty performer, dancing across the stage, flirting with her audience. She times Demons Don’t Get Me Down well; perhaps her prescription for a broken heart, she sings: “Well I wish I has some whiskey and I wish I had some weed, On nights when I feel so alone, Oh baby that’s just what I need…” It’s raucous and belies the downbeat lyrics.

Ortega is a worker; she toiled away on the Toronto indie scene for some 10 years before signing to Last Gang Records in 2011. And those years of struggling have given her more than enough food for thought. The title track from Tin Star lays that trouble out on full view. “I wrote this song for people like me,” she tells us. “You don’t know me, I’m a nobody. If music wasn’t running through my blood in my veins I might just walk away…”

Despite the years of practice, her voice is raw and unpolished. It has all the quirks and twangs to be expected from a country artist, but it has a roughness to it that’s at times playful but also adds authenticity. Three covers get a look in; The Eagles‘ Desperado, Timber Timbre‘s No Bold Villain and Johnny Cash‘s Ring Of Fire. The collection tells much about Ortega; from the country legend to the rock pioneers and the Canadian indie-folksters, she’s so much more than a country singer. Tonight she was rock ‘n’ roll, soul, she was even a bit punk. She sings of the American dream, warts and all, and doesn’t let a bit of it escape your notice.