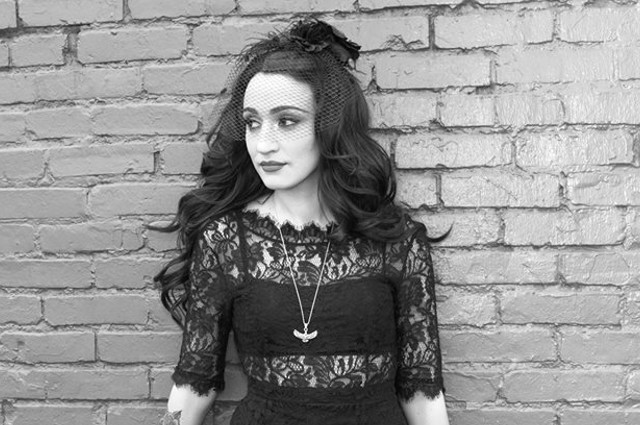 Lindi Ortega is having a ball at the moment; a peep at her Instagram account shows her leaping on hotel beds, buying plastic jewellery on her travels up and down the UK and hanging out with the band she’s brought with her. No moans about life on the road (which would be forgivable, given the length of this European tour)…she’s living it up like rock stars are supposed to.

And who can blame her; she’s had to graft hard to get here. Years of gigging around her native Toronto, stints as a backing singer and self-released records…her last couple of albums have finally seen her making inroads towards the acclaim she surely deserves. Tonight she arrives on stage a whirlwind of excitement, desperate to tell her stories. For the uninitiated, she lays her cards on the table straight away, opening with Rundown Neighbourhood, from last year’s Faded Gloryville: “You can have some of my weed if I can smoke your cigarette,” she bargains. This is a recurring theme in Ortega’s work – she sings of excess; booze, drugs, love, loss and heartbreak. And she does it all with a voice that sounds like it’s been lifted from an old bar in Nashville and spun around some candyfloss, knocked back with some Scotch. She’s Dolly Parton with an almost punk edge.

Dressed in a tiny black dress and trademark red cowboy boots with matching lippy, she urges the audience to dance along: “I look like Elaine from Seinfeld when I dance”, she laughs…but it certainly doesn’t stop her. These moments are where she usually excels but some of the hard, whiskey-spun raucousness is missing tonight; Ortega is on perfect form but the volume and ferocity of the music feels a bit weak in comparison…it all needs cranking up just a notch; a little bit louder, a little bit harder. So tonight, it’s some of the more tender, gentler moments that stand out.

Surprisingly, she dedicates a song – Angels, from 2011’s Little Red Boots – to Terry Wogan: “He was very kind to me when I met him.” She also dedicates Tin Star, the title track of her 2013 record, to “all the underdogs of the music world,” – it’s a song that sings the blues about life as a jobbing musician: “Well if the music wasn’t running through the blood in my veins, I might just walk away.”

Faded Gloryville gives another glimpse of how hard she’s worked; the title, she tells us, is the name of a place she refers to when she has self doubts. Her heavily accented, country styled vocals can sometimes be overlooked on her more upbeat songs, but here they are spine tinglingly good. Powerful yet vulnerable, she doesn’t just wear her heart on her sleeve – she offers it up in her hands, begging you to take it, examine it.

She leaves after a broken down cover of Ring of Fire – which feels brilliantly apt and goes a good way to summing her up. It’s a country classic but she’s messed with it, made it a little bit dark, a bit more woozy. And infinitely more interesting.