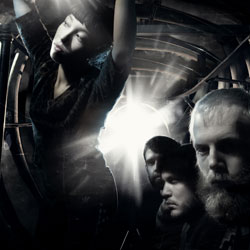 Having attracted the attentions of Damon Albarn and his fellow Gorillaz with their two albums, tonight sees Gothenburg four-piece Little Dragon headline their largest UK gig to date. First up however is mystery masked support act SBTRKT, who plays a mix of grinding electronics, kicks and breaks lightened by fleeting melodies.

The man behind the tribal mask, Aaron Jerome, hammers away on electronic drums as a vocalist accompanies the music. Whether it’s down to the mixing levels or the performance though, the music and vocals don’t seem to tally. For instance, enough is audible of what sounds like an uplifting vocal banger to make it worth checking out in its original format (and SBTRKT’s remixes for Tinie Tempah, Basement Jaxx and M.I.A testify he does have some kind of musical pedigree) but tonight’s performance just simply doesn’t sound good.

Little Dragon then take to the stage and kick off with the very track SBTRKT remixed for them, Never Never. They follow this with the dubby Test, taken from their self-titled debut, as singer Yukimi Nagano accompanies it by banging on what look like hanging glass bowls. But sadly the sound suffers once again and the mix of music and vocals don’t seem to be fully in sync. Nagano’s voice manages to be simultaneously innocent and soulful but it is often so drowned in reverb it sounds like the Swedish four-piece is performing in the bath.

Thankfully, the problem seems to subside as the set progresses, either that or Little Dragon somehow overcome it through the sheer strength of their music. Looking Glass brings together electronica, rock and pop but the end result never sounds contrived. As with the majority of their tracks, it’s odd yet oddly accessible. Little Dragon don’t so much as duck pigeonholes as completely disregard them.

Fortune’s synth led lullaby sees Yukimi’s vocals gracefully dance and glide over the top while a huge cheer goes up for heartfelt ballad Blinking Pigs, which once again puts her voice to beautiful use. The singer even grabs a drum stick and joins in with the drummer as the soaring synths kick in for a performance that is little short of brilliant.

The mellow ’80s stylings of Feather, with handclaps galore and a fantastic extended and improvised ending, forms another highlight before the piano-led Twice provides yet another set of goosebumps to bring the show to an end.

The energy, movement and melody of the music and Nagano’s vocals – and the way she jigs, hops and smiles her way around the stage, clearly loving every moment – make it easy to see why Albarn snapped up Little Dragon to collaborate on the recent Plastic Beach album. What tonight’s performance may have lacked in sound quality was more than offset by the music and the band’s playful willingness to skip from genre to genre while rarely putting a foot wrong. On this evidence, Little Dragon’s rising profile seems fully deserved.