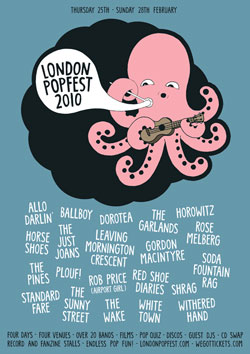 It might be pouring with rain outside, but in the murky depths of the 100 Club it’s a sunny Spring afternoon. The haze of flowery dresses and skinny corduroy trousers are glugging cider, munching on cupcakes and rummaging through the merchandise stall’s boxes of seven inch records, and when the DJ plays Hefner, there’s a scramble to the dance floor. No, it’s not an exert from Stuart Murdoch‘s dream diary; this is the main event of this year’s London Popfest.

The festival began on Thursday with a four-band show at Cafe Oto. On Friday, an ‘afternoon gathering’ at the Roxy involved screenings of two indie-pop documentaries The Shield Around The K and Take Three Girls: The Dolly Mixture Story. That night the party moved on to the Buffalo Bar for a gig including The Just Joans, The Garlands and Horowitz. But today’s all-dayer is the biggie.

The great and good of the twee world are out in force – a quick glance around the room and Ian Watston, who runs legendary indie-pop night How Does It Feel To Be Loved, can be clocked hovering around the sound desk, while Pocketbooks‘ guitarist Ian Cowen is manning the merchandise stall. But it’s not all about posing and mingling. When a band takes to the stage, the assembled masses take it very seriously, and all eyes and ears are glued on the iconic ‘100’ at the far side of the room.

Buxton trio Standard Fare have been causing ripples since Steve Lamacq championed them on his BBC 6Music show recently and, with a trip to SXSW pencilled in for later this month, 2010 could well be their year. Singer Emma Kupa’s vocal has echos of Darling Buds‘ Andrea Lewis, but it’s when she’s joined by Danny How that the band really comes to life. Singles Dancing and Fifteen show them at their best – hook-driven, no-nonsense indie-pop of the highest calibre.

Also off to Austin, Texas, in a few weeks are Allo Darlin. A more cutesy affair than Standard Fare, frontwoman Elizabeth Morris sings about Henry Rollins’ dancing and wanting to watch cartoons all night. A slow start is forgiven thanks to two key moments – the first being when the uke-wielding Morris braves it alone for a room-silencing, eye pricking two minutes. The second is The Polaroid Song – a more rounded, noisy sound than the rest of their set, it’s their best song, and they know it.

Up next, Swedish band Dorotea pack a short, sharp punch with spiky minute-long blasts of Television Personalities-esque punk-pop. They’re insanely catchy and their set flies past, leaving the floor open for Brighton’s Shrag.

They must be feeling confident because tonight, despite being so high up the bill, they completely ignore their album, opting to play a set of new material – one song is so new, in fact, that singer Steph has to read the lyrics from a notebook as she careers around the stage.

There’s more than a hint of Britpop about them – Elastica, Kenickie and Sleeper all come into play here, and it’s when backing singer Helen joins in with her Bis-esque yelps that Shrag are at their best. They’re fun, playful and, judging by the surge toward the merch stand, they earned themselves a few new fans tonight.

Headliners Ballboy feel like the elder statesmen of the day. Not only have they been around for longer than the other bands, but they adhere closer to ‘the rules’ of their genre. Their ability to turn mundane, everyday tales into songs earns them grins across the board. “This is about a friend… and it is a friend… who meets a lady and they’re getting on well, and at the end of the night she asks if he wants to go back to hers. But she lives in Zone 2 or 3 in north London and he needs to be in Zone 2 or 3 in south London the next morning… so he says ‘no, sorry – I’ve got an early start’,” he laughs, introducing Weekend Adventure.

If the Scots as a nation are kings of indie-pop, Ballboy are happy being their ambassadors for the night, easily switching between sentimental, and occasionally dark, poetic tunes and sillier tracks that raise a giggle and a wiggle, with titles like I Am An Indie Pirate and I Will Scuttle You. They wrap up with I’ve Got Pictures Of You In Your Underwear, leaving a full two hours for dancing, before the crowd dust down their polyester for a pop quiz and music from White Town and The Wake the next day.