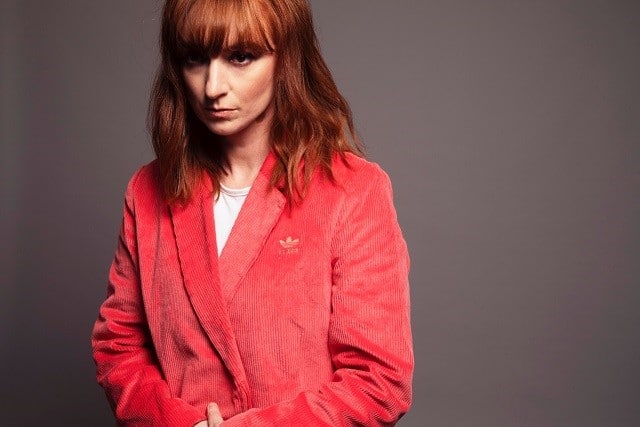 Although she tours with an enthusiastic young drummer and quintessentially stoic keyboardist in tow, at the start of last night’s show at Brighton’s popular Hope & Ruin, you’d be forgiven for thinking LoneLady’s Julie Campbell was appearing on stage alone. And ostensibly playing at another venue in town, considering how quietly her guitar and vocals were placed in the mix during first song The Catcher. The chorus to the track, the opener to this year’s Former Things album, finds Campbell acknowledging her ample grievances with modernity, boldly stating “I’m not gonna look at the future” and continues the seam of rich, groove based pop, laser focused on urban degradation and existential dread with which she’s become synonymous.

“These new songs are new to me too,” a sheepish Campbell confesses as she looks around the room attempting to cut through the chatter and gauge the reaction. As high syndrums are ungainly thwacked to her right and suitably gnarly Moog melodies babble away to her left, the first couple of numbers from the uncompromising Mancunian polymath get a measly considered clap as means of audience appreciation. Maybe the problem is the intimate atmosphere of tonight’s venue. These songs would no doubt be better suited heard in a neon bathed, concrete walled nightclub where you’d have the opportunity to lose yourself in their gloomy magnificence rather than this sweaty dive bar attic room, where you’re stood armpit to armpit, neck straining, trying to make out the defiant lyrics, catch the angular guitar work and glimpse the performers.

About three tracks in, when Campbell plays Fear Colours, you see the audience’s thought pattern change as the timid band begin to loosen up. Formerly leaden feet begin to free themselves from whatever has been steadfastly glueing them down and they start to tap, shuffle and fidget. A glistening, paranoid techno experience, it spins and throbs with twitching menace, gently winning the room over. It’s obvious that Campbell needs more time to get acquainted with these songs, so she can apply the same playful bravado and cheeky attitude that she reserves for older tracks.

When we get numbers like the skittish duosyllabic Bunkerpop from 2015’s Hinterland (which unironically seems to interpolate a snatch of the riff from Blue Öyster Cult‘s hoary, old denim leather and lace soft rock classic Don’t Fear The Reaper) you see the luminosity of that inner confidence shining through and blinding the crowd. LoneLady may not want to look to the future but let’s hope that over time she gets a little more comfortable in the present.