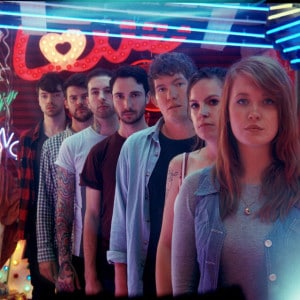 There’s something to be said for experience. Take Los Campesinos!; seven years and five albums in, and their traditionally raucous show is now conducted with a sense of ordered mayhem. They’re as slick as they could ever be; polished but no less charming for it. But that’s not something their support band are ready to aspire to just yet.

Joanna Gruesome, whose debut album was released earlier this year, fizz with an energy that only a new band can produce. Singer Alanna McArdle is the former bassist with Evans The Death, and her new band has that same clattering, chaotic backing; impossibly young, gangly men falling around, making irresistibly loud fuzz with their guitars, while she cuts an icy cool figure, calm in the face of all this chaos. Their live sound so overshadows the muffled recording of their LP, Weird Sister, that you can’t help feeling let down by its DIY sound. On Secret Surprise, McArdle has a voice that stabs, slices and slaps, but on record it’s muffled into a whimsical indiepop sing-song. They play a short set which, by Gareth Campesinos!’ own admission, forces the headliners to up their game.

Tonight’s an early show, with the headliners taking to the stage at 8:30pm sharp, but they still manage to play for over 90 minutes before the crowd are kicked out to make way for the Monday night clubbers. Los Campesinos! have retained a cultish appeal, with surely the most fiercely loyal fanbase in music; they’ve grown up with the band, devoted to these hormone-injected tales of lust, confusion, rejection and drinking, and they pogo and sing along from start to finish.

The show is a mish mash of songs, plucked from their entire back catalogue but their most recent, No Blues is heads and shoulders above the rest of the set. Essentially it’s still shouty indiepop with an added dash of melancholy, but Los Camp V is a little more mature. It’s got a bigger sound, which nods more towards Arcade Fire than the indiepop they’ve typically aligned themselves with. They’ve even left their glockenspiel at home. Despite the new album, all the biggies get a look in – Death To Los Campesinos!, Romance Is Boring, Letters From Me To Charlotte, We Are Beautiful We Are Doomed, Songs About Your Girlfriend, Straight In At 101 – although predictably it’s You! Me! Dancing! that gets the biggest reaction, the sold-out venue heaving along to their signature track.

Their performance weirdly echoes their career in tone and tempo; they start off vicious, almost angry, as Gareth literally spits out his lyrics, but as time goes on, they get a little more reflective and sentimental, reeling off an Oscar-length list of thank yous (including their publisher, “Without whom we’d be on a Budweiser advert” quips Gareth).

There’s an especially emotional thank you for their fans (“We’ve got to go to work tomorrow and you guys make that really fucking hard,” Gareth admits, after telling them what a hard year it’s been in Los Camp-land. Before leaving the stage he waves his fist at the crowd, half victorious, half pissed off with the world. Los Camp could easily carry on doing a handful of shows every Christmas in the knowledge that their fans will always turn out, but it’s safe to say that everyone at Heaven tonight will be hoping that he was just getting a bit weepy, rather than alluding to something more drastic.

And with that the masses shuffle off into the night, exhausted from leaping, singing and pouring their hearts out, long before the clubbers have even stepped off the bus.