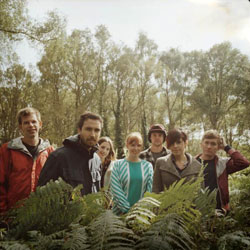 They’re hard, these homecoming gigs after a band has hit upon a bit of success.

They’re eager to please, but presumably eager to play too with that freedom and excitement they always play with, desperate to prove to the home crowd that they’ve not become U2.

Los Campesinos! are welcomed by the Cardiff student masses in a place where not so long ago they were getting drunk and messing about themselves. But soon everyone is forgetting the sentimental story behind tonight’s gig.

There’s a lot of chatter and bitching about Los Campesinos!, but they’re silenced come the first chords of any of their more skyscraping tracks. Opener Broken Heartbeats Sound Like Breakbeats bounces out with some frenzied playing, the band immediately connecting, lead man Gareth C screaming himself into the gig. But the bit that really burns deep is the little vocal line of “so I can be the beacon of hope that you always expected”. It reminds everyone here of why the hometown heroes became so in the first place, before everyone else had their say.

The melodies continue flying in crazy tempos, three keyboards, a glockenspiel, three guitars, a bass and a violin taking turns to lead and fade into the pulsing background, and the crowd form a wild moshpit, the band teasing and cajoling it with their unpredictable tempos. For sure, Los Campesinos! as a “whole” can leave a little to be desired. There are long periods where the music sags between their most poignant tracks and the jump around songs, but little moments are scattered here and there that fix attentions firmly on stage.

The keys and violin in This Is How You Spell Hahaha are playful here and soaring there, filling out the songs subtly and superbly, tempering the festivity with genuine musical wonder. Gareth warms to it and even embraces the nostalgic element of being back in Cardiff, telling of the rat infestation he once had at his house in Cathays (the district of Cardiff where tonight’s gig takes place), forging genuine links with the crowd.

The International Tweexcore Underground is typically self-conscious, awkward, yet brilliant at the same time, the post-album accusations of Gareth being a contrived and somewhat pretentious songwriter paling into insignificance in light of its genuine affection. The sweetest moment of all though comes wrapped in the free-for-all frenzy of You! Me! Dancing!, Gareth’s line celebrating Cardiff indie staple Twisted By Design coming across as particularly grand. It’s a real poignant, grass roots moment, a genuine gesture from a band who’ve come from the underground with all its passion intact, and coming in a song sultry, stylish and teeming with hopes and dreams.

Sweet Dreams Sweet Cheeks comes close to a You! Me! Dancing! type of free for all, before Gareth invites everyone back to a bar in town to hear him play some songs. It’s been emotional, dance-worthy, frustrating and brilliant. Los Campesinos are a fiery celebration of all things youthful and worthy of striving for.