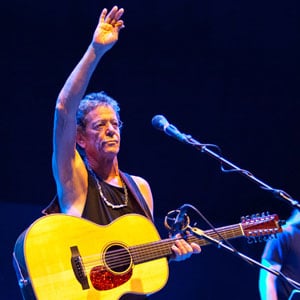 Almost a third of the show was drawn from his most recent and possibly least well-received album. But there were hints of people starting to warm to it, even a smattering of applause as Reed introduced The View with the words “this one’s from Lulu”. Although judging from the concurrent throng of people who seemed to head for the exits, it’s just as possible they were taking the title as an instruction. Loo? Loo.

While hardly the highlight, the Lulu songs were better than expected. The lack of Metallica probably helped, recasting them as Lou Reed songs rather than collaborative efforts. Something that certainly helped jettison some of the absurdly po-faced pretension that the album drowned in. It may even be that there is a sense of humour lurking in them that was totally lost on record. When Reed sings the opening to Brandenburg Gate “I’d cut my legs and tits off / And think of Boris Karloff”, there’s a hearty round of laughter. which doesn’t seem to upset him. And given the gentleman shouting “Louder!” after the song is finished is cut down with a withering “Too quiet for you, asshole?” you’d imagine if it wasn’t meant to be funny, Reed would have said.

Or maybe it’s just be that Lou makes for a more believable table than James Hetfield. Whichever it is, Brandenburg Gate, The View and Junior Dad were all more interesting (and more listenable) than the recorded versions. It certainly helped that expectations for those tracks were always going to be much lower than for some of his more widely appreciated material. But when he did reach back into his back catalogue, and the expectation level rose, there were occasions when he didn’t disappoint.

Heroin was magnificent, the change from the original startling. Where Reed was once completely in sync with the ever changing dynamic, riding the opiate wave with carefree abandon, now when the pace increases, there’s a sense of him grimly hanging on. It changes the tone to a wiser, wearier, strangely paternal one. Far less appealing was what they did to Walk On The Wild Side, slap-bassing it into 1980s funk-reggae territory, draining it of all the seedy, eye-lined glamour into something politely lounging around in stonewashed denim and slip on shoes.

It was a contrary night. Which is what we’ve come to expect from Reed. No way you could see him settling for basking in straightforward nostalgia. It’s fascinating to see his older songs shift in hue as they age and it’s also fascinating to see him trying new things, even if they are often more baffling than blinding. Besides, berating Lou Reed for being contrary and difficult is a bit like berating the sea for being a bit damp. And really, it’s hard to imagine him any other way.