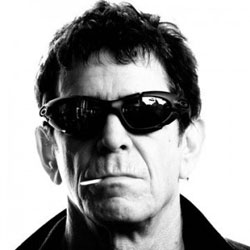 If you’ve never heard Lou Reed’s seminal 1975 Metal Machine Music – a double album of guitar feedback with no discernable separate tracks or lyrics – it’s hard to describe what to expect from this evening.

The easiest description, perhaps, is to imagine that instead of imposing a European-wide airspace ban following the eruption of volcano Eyjafjallajkull, the aviation industry instead ordered all aircraft to fly directly into the ash cloud emanating from it and then, as razor-sharp shards of volcanic glass tore through their jet engines and shredded their fuselages, ordered them to head directly for one another, crash in mid-air at full speed and, as they hurtled towards the ground, recorded the ensuing noise on their black box recorders, which were then delivered to the misanthropic grandfather of Godspeed You! Black Emperor and Nine Inch Nails for reprocessing into an instrument of aural torture.

In other words, you damn well should have listened to Metal Machine Music as often as possible, as loud as possible, for as long as your ears could take it. Ulrich Krieger definitely did, so much so in fact that in 2002 he did what should have been impossible – transcribing its sublime noisescape so that it could be performed live by the Berlin-based avant garde chamber orchestra Zeitkratzer. Reed met Krieger at the premiere, and was so impressed that he ended up playing guitar at subsequent performances.

This collaboration was the start of the journey that leads us here tonight, where Reed, Krieger and computer noise geek supreme Sarth Calhoun of the Symbolic Sound Corporation present a ‘night of deep noise’ as the Metal Machine Trio, producing a sonic onslaught in the spirit of the original, though not recreating it.

For anyone still suspicious of Lou Reed’s motives on the original album (was it a spit in the eye to his record company, commercial suicide cleverly planned to release him from his contract, or a sneer at his fans, to see if he could get away with an emperor’s new clothes of rubbish noise?), the evening will do little to assuage any fears. Arriving on stage 15 minutes after the advertised time to simply segue seamlessly into the relentless feedback that has been filling the gap is either a work of genius or an extension of a joke that’s been running for 35 years. Remarkably, within minutes of the Trio appearing there begins a steady trickle of escape from the audience, as if some of them really didn’t know what to expect. Honestly, it’s their loss.

Krieger on the other hand looks as if all his Christmases have come at once. He, at least, clearly believes Reed to be a musical genius who is not just letting him touch his hem but actually put on the garment. For the next hour, he, Reed and Calhoun assault the audience with a constant barrage of feedback, screaming electronics, deep, booming drums that now and again fight through to be heard, paranoid screaming sax solos and nothing remotely resembling a harmony, melody or tune.

It is, of course, brilliant. It is the noise that launched a thousand bands from Sonic Youth to My Bloody Valentine to iLiKETRAiNS and These New Puritans, inspiring musicians not only to pick up a guitar but to torture it, make it scream and then file its nails with sandpaper while piercing its eardrums with a sharp stick.

The evening started organically, the transition from intro to concert-proper deliberately vague, but the ending is more measured. A bang on the huge gong that sits at centre stage, followed by an attempted descent into silence. The Trio can’t get the ringing to quite stop (or is what’s left just in our ears?) but the intent works. Lou introduces his collaborators. He thanks the audience for coming. The grumpiest man in rock actually looks as if he’s enjoyed himself.

If the entire exercise of Metal Machine Music has been nothing but an insane joke, the best bands of the last three decades are all in on it, and so should you be. Long, long may it continue.